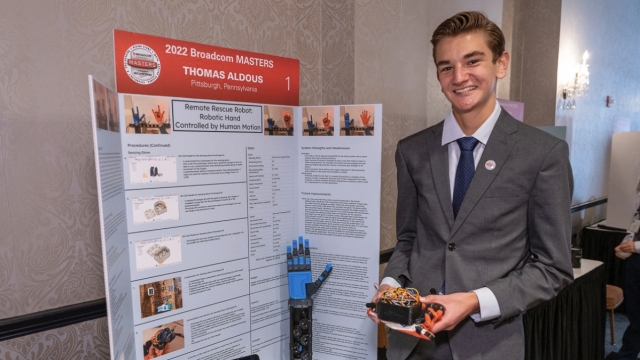 Everyone can use a helping hand. A Pennsylvania middle school student invented, designed and built one for use in dangerous situations, including natural disasters.

14 year-old Thomas Aldous won the top prize at the Broadcom MASTERS and Society for Science middle school competition. Aldous was awarded the Samueli Foundation Prize, which includes a $25,000 prize.

17-year-old Benjamin Choi used his time during the pandemic to invent a low-cost gadget that uses artificial intelligence to interpret brain waves.

Aldous' remote-controlled robotic hand connects wirelessly to a glove the controller wears. As the operator moves their hand, the robotic hand mimics the movements. It took six months for Aldous to design and build the hand as an eighth-grade student.

Thirty finalists took home a combined $100,000 in prize money. Other finalist science projects included the study of why honeybee colonies collapse and the study of the human memory.

Aldous says he will use the money to pay for college for him and his three siblings.