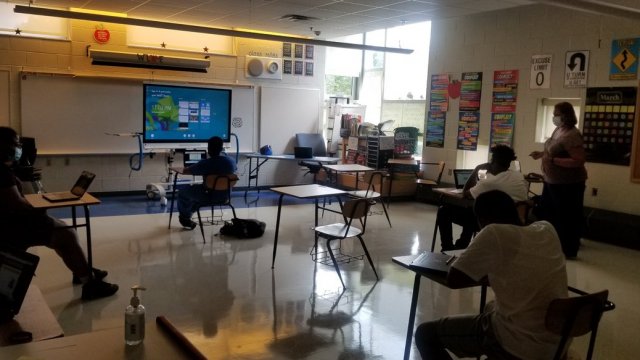 SMS
Teachers, Doctors Wary Of Health Risks Of Reopening Schools
By Lindsey Theis
By Lindsey Theis
July 14, 2020
Teachers say they're not being included in the conversation, and health experts say there are a variety of risks that come with reopening schools.
SHOW TRANSCRIPT

Teachers across the U.S. tell Newsy they’re concerned they’re not being heard.

"Teachers aren't being included in the conversation," Adam Dyer, a teacher in Plano, Texas told Newsy. "If you refuse to do that, you're going to have an incomplete solution whenever it comes time to implement it."

And when it comes to the health ramifications of returning to in-person classes too soon, to say they’re worried and anxious is an understatement.

"I can't imagine the trauma that a kid is going to have if a teacher dies, you know, like, like, if their teacher dies?" Sara Brunnschweiler told Newsy.

"If I have one student who has a bad roommate who ends up getting them sick, before they know what, they could be getting other people sick," Zach DeWitz, a college professor in Naperville, Illinois, said.

"It would be an enormous mistake, and that it would be morally reprehensible for us to return right now in the state of things," Lily Rutledge-Ellison, a teacher in Denver, Colorado, told Newsy.

Health experts say there are a variety of risks that come with reopening schools. The CDC guidelines for reopening say full classrooms carry the highest risk, but even reducing class sizes and 6-foot social distancing presents some danger of spreading the virus.

Epidemiologist Ali Mokdad tells Newsy the makeup of local coronavirus cases and whether they’re increasing or decreasing should play the biggest role in how schools form their plans to start back up.

"Unless you take care of the whole picture, you're going to fail," Mokdad said.

When it comes to planning, Dr. Joshua Sharfstein with Johns Hopkins says schools should have more than one plan, depending on the virus spread in their area. He adds teachers with an elevated risk should be able to opt out of coming to work.

"If there's just an enormous amount of coronavirus in the community like we're seeing right now in communities in Arizona and Texas and Florida, I think it's going to be very hard to open schools in the middle of all that safely, or as safely as possible," Scharfstein, vice dean for public health practice at Johns Hopkins Bloomberg School of Public Health, told Newsy.

Research shows school-aged children are very unlikely to get seriously ill, and they're less likely than adults to be passing it between them. But adults – teachers, school administrators, paraprofessionals – remain likely to contract or spread the virus.

A recent Kaiser Family Foundation analysis found one in four teachers are at greater risk of serious illness if infected because of preexisting health conditions. And while testing, contract tracing and isolating sick people is key, doctors say they can’t solve everything.

"That's a really tough question as to how do we employ testing in the school system. Quite clearly, doing it in any kind of a broad-based, ongoing fashion becomes logistically very difficult and very expensive," said Dr. Mark Rupp, chief of Infectious Diseases Division at Nebraska Medical Center.

By June, more than 55 million U.S. children missed months of in-class instruction. And while many questions remain about logistics behind reopening, experts say even if done extremely well and in areas with low spread, low risk, there’s still a chance for COVID-19 to spread in a school near you.