Tax Cuts May Not Do Much To Help GOP 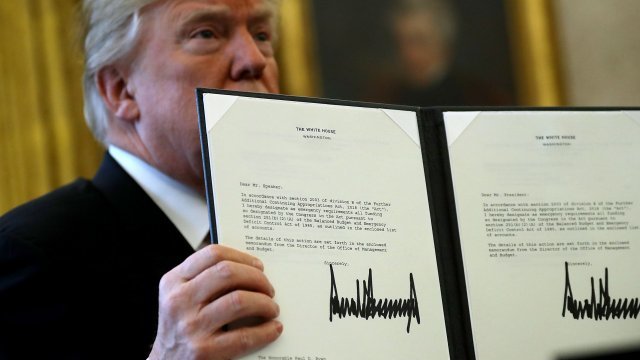 A recent poll shows over half of voters haven't seen a difference in their paychecks since President Trump's tax cuts.

Republicans facing tough midterm elections are pinning their hopes on tax reform, but the issue might not be as winning as they think.

In a recent survey conducted by CNBC, only 32 percent of respondents said they noticed more money in their paychecks after the tax cuts. And of those, only 38 percent said the extra money helps them "a great deal" or "a fair amount." That's in contrast with the Trump administration's assessment that 90 percent of earners would see an increase in pay.

What's worse, voters just don't care much about tax reform. A recent YouGov/HuffPost poll found only 9 percent of those surveyed said the issue was one of their top two priorities in the midterms.

No, You Won't Soon Be Able To File Taxes On A Postcard As Trump Says

The president says many people will be able to file taxes on a postcard in 2019. That's simply not true, and filing might get more complex for some.

Republicans are currently trying to ward off a wave of Democratic enthusiasm before the midterms and keep control of Congress. The GOP is counting on tax reform to turn the tide; so far, they've still got work to do.

U.S. Rep. Mike Conaway of Texas told Bloomberg that Republicans need to keep hammering the benefits of the tax cut home, saying, "We're going to have to continue to brag on it all year."

But things aren't all doom and gloom for the GOP. Strong economic numbers — an issue voters said was a top priority — might bolster the party in the midterms.