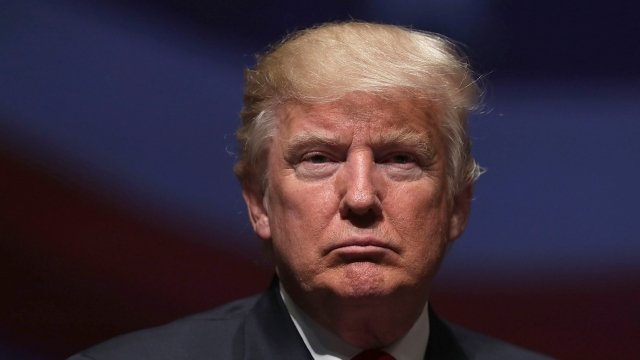 SMS
Why The Conversation Around Trump's Mental Health Is Controversial
By Casey Mendoza
By Casey Mendoza
January 6, 2018
Following the release of Michael Wolff's "Fire and Fury," many have speculated on the mental fitness of President Donald Trump.
SHOW TRANSCRIPT

Conversations surrounding mental health are often tricky and personal. But the topic becomes even more complicated when those conversations are about a public figure — in this case, the president of the United States.

Following the release of Michael Wolff's book "Fire and Fury: Inside the Trump White House," many people took notice of the depictions of President Donald Trump's mental fitness. Firing back on his depiction, Trump tweeted that he was "a very stable genius."

Psychology experts have previously speculated on Trump's mental health, even before Wolff's book and Trump's tweets. But some of that speculation could actually be considered unethical.

That's because of the "Goldwater Rule," which bars members of the American Psychiatric Association from diagnosing public figures they have not personally evaluated. The rule is named after former presidential candidate Barry Goldwater, who, in a survey, was deemed psychologically unfit to be president by psychiatrists who hadn't actually examined him.

The Goldwater Rule doesn't stop other people from speculating, and beyond speculation about the current president, research has shown that many former presidents may have had mental illnesses.

After reviewing the biological sources for the first 37 presidents, researchers determined that half of them may have lived with some form of mental illness — including depression, anxiety, social phobia or bipolar disorder.

Abraham Lincoln is a notable example. Throughout his life, those around Lincoln described him as melancholic — or, sad "without apparent cause." Many modern clinicians now agree he suffered from depression.

And Theodore Roosevelt is speculated to have shown signs of bipolar disorder. His two-year expedition through parts of the Amazon has been described as indicative of "manic thinking."