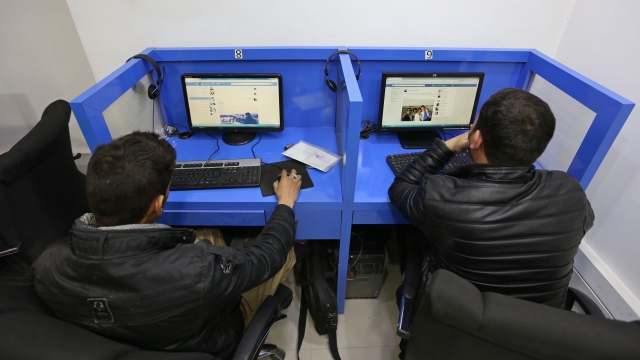 SMS
How The Taliban Is Utilizing Social Media In The Afghanistan Takeover
By Tyler Adkisson
By Tyler Adkisson
August 24, 2021
The Taliban is banned from most major social media platforms, but it’s still utilizing those online spaces to spread their messaging.
SHOW TRANSCRIPT

The Taliban has been banned from networks like Facebook and YouTube but over the years they still found ways to refine their image and spread their messages on western social media platforms.

Experts told Newsy the group used this technology to build political momentum that aided in the takeover of Afghanistan and continues to do so to try to calm the nation.

Part of what's driving the Taliban's social media push is rapid cell phone adoption in Afghanistan. According to the World Bank, only about 1 million Afghan citizens had access to a mobile device in 2005. In the decade after the U.S. invasion, that peaked at nearly 24 million by 2017.

"They have gotten more pragmatic and smarter in using this technology," says Sher Jan Ahmadzai, director of the Center for Afghanistan Studies at the University of Nebraska-Omaha. "On top of that, when Taliban were in Pakistan, they have had tremendous support […] from the state of Pakistan itself. In terms of advice, technical advice or theoretical advice on how to utilize the media."

Experts following Taliban social media channels during the takeover told Newsy the group used platforms to establish a sense of normalcy for those still in the country, and frame the group as more progressive than previous versions of the Taliban.

In some cases, the Taliban even used WhatsApp to set up emergency medical service and security hotlines for citizens.

Miburo's director of research, Colin Eide, says, "The majority of military or political content has been focused on security provision and reconciliation. Showing people, lots of people who are involved with the former government, even local police chiefs, local provincial assistant governors and vice governors being happy and safe."

The Taliban isn't limited to just one platform, it uses networks like Twitter, WhatsApp, and YouTube to control their public relations image on both domestic and international fronts.

"I think the intended audience really depends on the platform that's being used," says Darren Linvill, lead researcher at Clemson University's Media Forensics Hub. "Twitter is a public platform, and that's how you reach out to a broader audience. That's how you reach out to audiences beyond your borders, frankly. They're tweeting in English, so it's pretty clear that they're looking for an international audience. "

As to whether the Taliban's messages trying to convince citizens they're a legitimate government, experts told Newsy they were skeptical about the current messaging.

"They're trying very hard to look like a softer, squishier Taliban than they were in the past," Linvill says. "And I think it's going to be really important to see if that actually plays out. Most experts, and I'm going to agree with them, kind of doubt that that's the case. It's hard for Tiger to change their stripes."