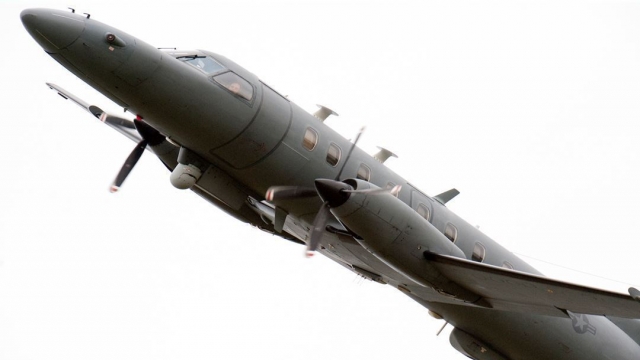 The country saw armored humvees roll down streets, people beaten and shoved, and chemicals and rubber bullets sprayed to disperse crowds. But what Americans may not have seen at protests for George Floyd were surveillance planes overhead.

"I'm concerned that there might be some intelligence activities taking place against U.S., American persons," says K. Campbell, a former U.S. Air Force intelligence officer. "There are very specific requirements, specific times it's allowed. And unless those requirements are met, it would be against DOD regulation."

An obscure surveillance plane, often used after natural disasters and to track terrorists and drug traffickers, was spotted circling above cities by a researcher at the Toronto-based Citizen Lab.

The National Guard, which carried out the military mission at the protests, tells Newsy the reserve force isn’t at liberty to discuss specifics but is “not aware of any requirements for aerial surveillance support.”

It comes as the National Guard investigates two low-flying helicopters, including a medical evacuation helicopter, which intimidated and panicked demonstrators in the nation’s capital.

"That psychological warfare shouldn't be used against U.S. citizens. That's something we use against our adversaries and enemies overseas," says Campbell. "The same lack of oversight that seemed to lead to that happening with a medical helicopter might also lead to intelligence collection by military personnel."

Another aircraft, a Predator B surveillance drone over Minneapolis, was “preparing to provide live video to aid in situational awareness” but turned around, U.S. Customs and Border Protection told Newsy. Footage, initially processed through a system called Big Pipe, can be stored for up to five years.

Former members of the intelligence community are also denouncing the militarized response on the ground.

"To watch the videos and some of the stuff we're seeing out of New York or Minneapolis or Los Angeles is reminiscent of the videos that we would typically see out of a kind of failing state as an authoritarian leader looks to crack down on opposition," says Dennis Gleeson, a former CIA analyst.

The line between soldiers and police officers, combat zones and communities, has steadily blurred. In the ‘90s, police departments began receiving excess military property through the Defense Department’s 1033 program.

After the 9/11 terrorist attacks, and with grants from the Department of Homeland Security, the pipeline of tools for combat and military training accelerated. Researchers say it’s led to more violent behavior, causing a shift in perceptions of who “the enemy” is.

"Get in the house!" law enforcement shouted in one video that went viral on social media during the protests.