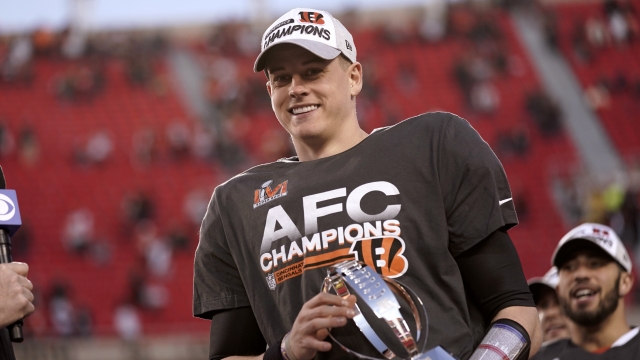 In December 2019, Joe Burrow had just won the Heisman Trophy for the eventual national champion Louisiana State University Tigers. After thanking his teammates, he turned the attention to an unlikely source — those who live in poverty in his hometown of Athens, Ohio.

"Coming from southeast Ohio, it's a very impoverished area," Burrow said. "And the poverty rate is almost two times the national average. There's so many people there that don't have a lot and I'm up here for all those kids in Athens County, that go home to not a lot of food on the table, hungry after school. You guys can be up here too."

In the wake of his emotional speech, donations began pouring in to the Athens County Food Pantry. More than $500,000 was raised initially.

In Athens, Ohio, more than 20% of residents are food insecure, meaning one in five people there are faced with hunger.

Since Burrow's Jan. 22 divisional round playoff win against the Tennessee Titans, the fund received more than 3,000 donations.

Since the Bengals' win Sunday in the AFC Championship game against the Kansas City Chiefs, Burrow's fund has seen another 4,000 donations.