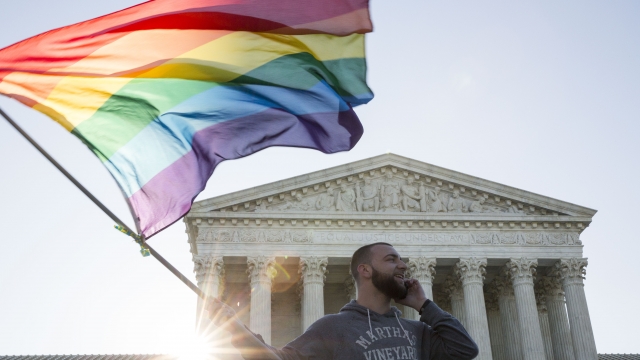 It could lead to the first national level decision on whether federal laws protect workers on the basis of sexual orientation and gender identity.

The move could lead to the first national level decision on whether federal laws protect workers on the basis of sexual orientation and gender identity.

Title VII of the Civil Rights Act of 1964 prohibits employment discrimination of workers "on the basis of ... sex," but it doesn't specify further.

The Supreme Court agreed to take up three cases involving similar ideas. Two of those cases will be heard together, since they essentially want an answer to the same question.

Altitude Express Inc. v. Zarda and Bostock v. Clayton County, Georgia both involve men who say they were fired after their employers learned they were gay. The employers disagreed, and after legal disputes in lower courts, took the cases to the justices for their decision. Those two cases want to know if Title VII protects workers on the basis of sexual orientation.

Next up, R.G. & G.R. Harris Funeral Homes Inc. v. Equal Employment Opportunity Commission asks the high court whether those same laws and a prior SCOTUS decision prohibit job discrimination on the basis of gender identity and sex stereotypes.

In that case, the Equal Employment Opportunity Commission says a funeral home fired an employee after learning that she planned to have sex reassignment surgery and would start wearing women's clothes to work. A lower court ruled in favor of the EEOC, but the funeral home brought the case to the high court, asking it to review the ruling.

While there are no federal laws that expressly prohibit discrimination on the basis of sexual orientation and gender identity, there are some state and local laws that do so.