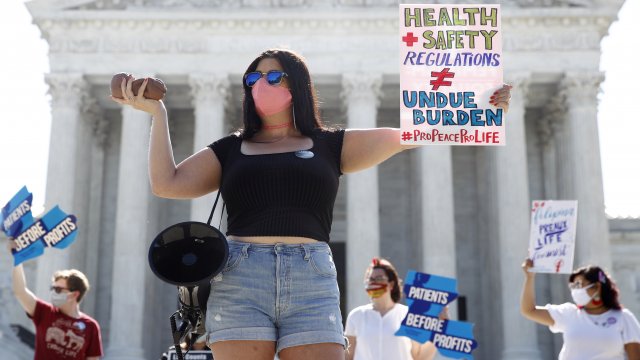 There was surprise for some on both sides of the abortion debate Monday as the United States Supreme Court overturned a law restricting the procedure thanks to a vote from the conservative wing.

In a 5-4 decision, the high court struck down a Louisiana law that opponents say would’ve left the state with one abortion provider.

The case goes back to a 2014 state law requiring any doctor performing an abortion to also have the ability to admit patients to a hospital within 30 miles.

Critics say such requirements are not about the safety of the patient. Instead, they say such rules are used to put local pressure on area hospitals to reject physicians who perform abortions. That can force clinics to close or prevent them from even opening.

The Louisiana law mirrored a 2016 Texas case where the court ruled such laws caused undue burden on women seeking abortions and that admitting rights didn’t provide any real health benefits to women.

“We're very pleased that the court heard the voices of the medical community and of clinicians and physicians who are providing abortion that the Louisiana law similar to the Texas law has no patient benefit,” said Skye Perryman, general counsel for the American College of Obstetricians and Gynecologists.

In the 2016 Texas case, Chief Justice John Roberts sided with the conservative justices. This time he sided with the liberal wing of the court, though Roberts said he based his decision on a legal doctrine called “stare decisis.” That means he felt obligated to follow the precedents set by the earlier court rulings.

Anti-abortion groups say they are disappointed with his decision.

“It's terribly disappointing. It doesn't make any sense. It shows it's a political calculation, not a constitutional one,” said Mallory Quigley, vice president of communications for the Susan B. Anthony List.

They also say the ruling only fuels their push to reelect President Trump in the hopes of gaining another Supreme Court appointee.

“It really makes November all the more important, the need to elect justices in the mold of [Neil] Gorsuch and [Brett] Kavanaugh,” said Quigley.

Some abortion rights groups are breathing a sigh of relief, saying Roberts' decision to lean on precedent could impact other cases making their way through the courts.

“It will ensure that any sort of band not rooted in science or the advancement of medicine will not stand that any ban abortion bans that imposes an undue burden on people seeking access to abortion care will not stand,” said  Aimee Arrambide, executive director of NARAL Pro-choice Texas.

But there is also concern that given a different law, Roberts would side with the conservative justices.

Regardless, leaders on both sides say this is by no means the end to the fight over abortion.