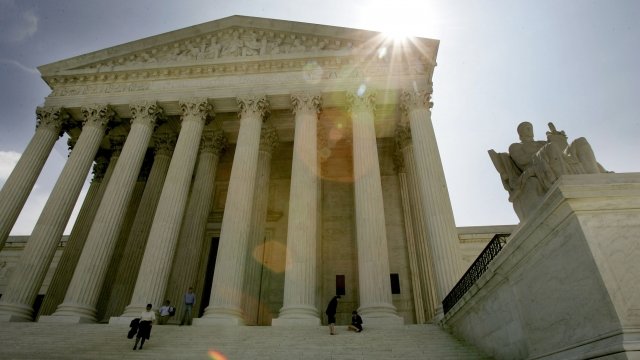 The Supreme Court blocked a lower court's ruling on refugees who have formal assurances from resettlement agencies.

The Supreme Court granted the Trump administration's request to put part of a lower court's decision about the so-called travel ban on hold.

Last Thursday, a federal appeals court said the administration can't bar roughly 24,000 refugees who have formal assurances from resettlement agencies that they'll be allowed to move to the U.S.

On Tuesday, the Supreme Court blocked that decision "pending further order" from the court.

In June, the Supreme Court OK'd part of President Donald Trump's travel ban, but said anyone with a "bona fide relationship" with someone in the U.S. would still be allowed in.

What constitutes as a "bona fide relationship" has since become a topic of debate.

New York Attorney General Eric Schneiderman is headed to court over the Trump administration's decision to end the DACA program.

The administration's definition excluded some relatives, like grandparents, cousins, aunts and uncles.

Opponents of the ban fought that definition in court and won, and the Trump administration didn't appeal that part of the lower court's ruling.

The Supreme Court will ultimately decide the fate of the travel ban as a whole. Arguments are scheduled for Oct. 10.