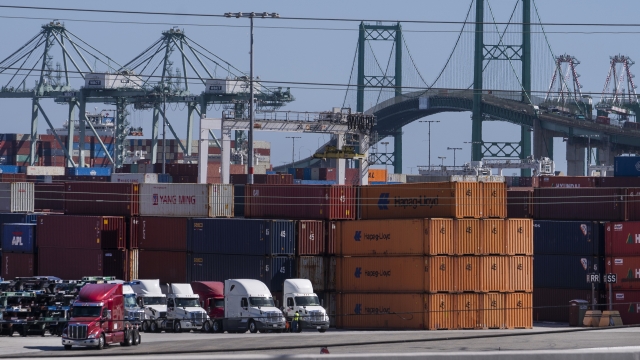 As prices climb amid supply chain mayhem, dozens of cargo ships and thousands of shipping containers are stuck in the Pacific.

Now, everything from toothpaste to snow tires is getting more expensive.

Procter & Gamble says it will raise prices over 90 days on grooming, skincare and oral care products.

"With shipping delays, they might not be able to get materials again before the end of the year," Silver in the City owner Kristin Kohn said.

Holiday gift suppliers are shorted and tire shops are trying to get drivers equipped for winter.

"Get them now, because prices, as we're seeing ... they're continuing to climb and climb and climb, so we'd hate to see somebody get kind of stuck when they absolutely need them," Nick Trigilio, with Tread City Discount Tire, said.

"We have some issues with our infrastructure. Issues that have to do with decades of underinvestment," he said. "Sometimes when you see ships waiting in the ports, that might actually have to do with the availability of trucks and either inland ... or moving those containers off those ships or out of the ports and clearing room for the next ones."

Images from the European Space Agency's Sentinel 2 satellite shows some 20 ships off the coast of Los Angeles in fall 2019. That number has ballooned to roughly 70 — last month.

The port of Los Angeles told Newsy Thursday that empty shipping containers are contributing to the backlog, with nowhere to go once they're unloaded. And the backup is negatively impacting its emissions output.

But it's about more than logistics.

"Wages are not keeping up for some people out there, and that will prove to be a difficult period for them," Jim Russell with Bahl & Gaynor Investment Counsel said. "While we think inflation will moderate, perhaps early next year ... it's not guaranteed."

It's another uncertainty as the world tries to claw its way back to routine.