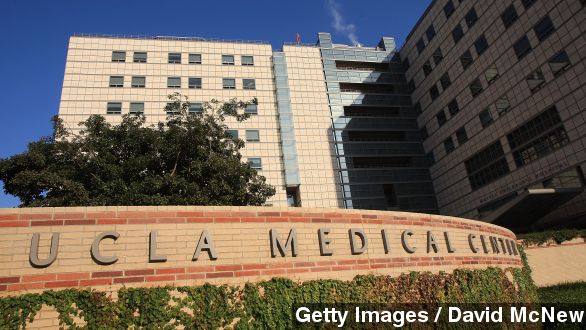 SMS
Superbug Outbreak Linked To 2 Deaths At UCLA Hospital
By Jay Strubberg
By Jay Strubberg
February 18, 2015
More than 100 patients might have been exposed to a deadly bacteria known as CRE at UCLA Ronald Reagan Medical Center.
SHOW TRANSCRIPT

More than 100 patients might have been exposed to a potentially deadly superbug bacteria at a California hospital.

According to multiple outlets, the superbug, known as CRE, has been linked to the deaths of at least two patients and has infected seven others at UCLA Ronald Reagan Medical Center.

In a statement, UCLA said the exposures occurred "during complex endoscopic procedures that took place between October 2014 and January 2015."

Medicals officials say the problem occurs when the device is moved from to patient to patient, as it's hard to sterilize the scope after it's been used. (Video via USA Today, KING-TV)

"CRE, this superbug, lives in the gut. ... They detected it on endoscopes which are used to do upper GI studies. ... The manufacturer says it's hard to disinfect that scope," Dr. Bruce Hensel told KNBC.

According to a previous press release from the CDC, the superbug bacteria can "kill up to half of patients who get bloodstream infections from them."

CRE has also popped up several times in recent years all across the country. It's what CDC director Dr. Anthony Fauci has referred to as a "nightmare bacteria."

"It's resistant to virtually all antibiotics. So, when an individual gets this microbe and it invades the blood or invades tissue, curing them becomes very difficult," Dr. Anthony Fauci of the National Institutes of Health said.

UCLA says the contaminated endoscopes have been removed from the facility and all patients subjected to possible infection have been sent a free home-testing kit — which will be analyzed by the university.