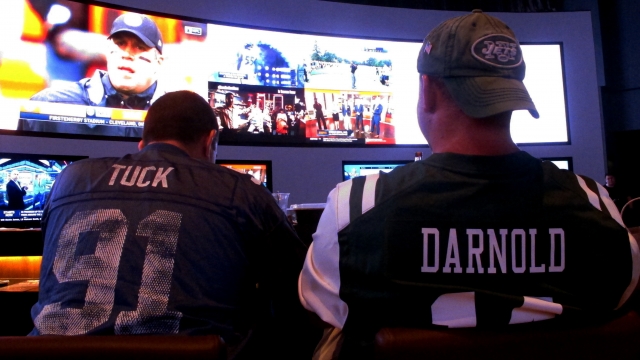 SMS
Fans Are Breaking Records Betting On Super Bowl LVI
By Ben Schamisso
By Ben Schamisso
February 10, 2022
The American Gaming Association forecasts that over $7.6 billion will be wagered on Sunday's big game.

The Super Bowl has long been one of the most popular events to bet on in the world. But this year, the big game is expected to set new records.

That's a result of millions of Americans being allowed to wager in their home states for the first time.

"There's 130 million American adults who now have access to the legal market that they didn't have before," Clark continued.

Overall, more than 31 million Americans plan to bet a combined $7.6 billion on Sunday's final, according to the American Gaming Association.

While many prefer to gamble on the final outcome, there are other, weirder bets designed to make every second of the game count.

PointsBet's Head Oddsmaker Jay Croucher says one bet is whether a coach wears a hat on the sideline during the game, and one of the most famous ones is the length of the national anthem.

DraftKings Director of Sportsbook Operations Johnny Avello says another bet is the color of the Gatorade that's going to get poured on the coach at the end of the game. He says, "Clear is the favorite. It's followed by orange, and then there's blue."

These are called prop bets — short for proposition — and Croucher says they are increasingly popular.

"People just want to be able to bet on absolutely everything," he said.

That includes the halftime show and commercial breaks. For example: Will Snoop Dogg smoke weed? And how many commercials will have a dog in them? Or will any player propose on the field after the game? If you think so and you're right, a $10 wager on the proposal bet would pay about $52.

Oddball prop bets tend to be low-strategy, though if you're thinking coin flip, tails leads heads 29 to 26 over 55 games.

"Have some fun with it," Clark said. "But set budgets, know your limits. Really ensure that you have a game plan and bet responsibly."