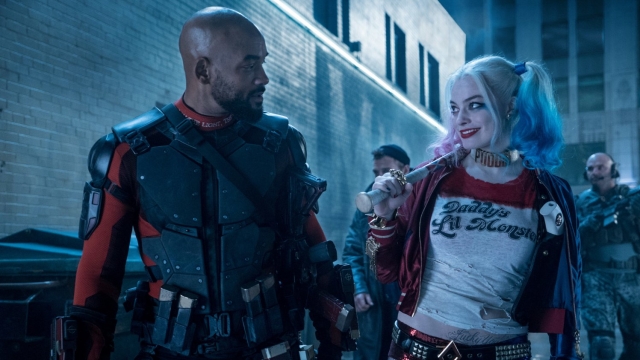 With a movie like "Sausage Party" in theaters, you may be expecting a bunch of low-brow jokes. Well, you're right. That's the plan. But before we get to Seth Rogen's latest, let's look at Harley Quinn and the gang.

Holding to the No. 1 spot — but not by much — is "Suicide Squad", bringing in an estimated $43 million. That's quite the drop-off for the band of bad guys, considering last week's $133 million haul. But this somewhat disappointing sophomore weekend hasn't stopped the anti-hero flick from pushing right past $460 million worldwide in a matter of days.

All in all, it's solid return for a movie we all expected to do well. But the real wieners this weekend are a group of foul-mouthed sausages.

Taking the No. 2 spot with a $33 million debut is "Sausage Party," a movie for your inner inappropriate child. "Sausage Party" more than doubled its box office projections, with most folks expecting a modest $15 million weekend.

And for what it's worth, this is the best debut for an animated R-rated film ever — but to be fair, there isn't much competition in that category.

Perhaps most impressively, "Sausage Party" carries an 82 percent Rotten Tomatoes score, which is pretty damn good for a movie about sentient groceries.

Taking the No. 3 spot this week is "Pete's Dragon," an actual kids' movie. "Pete's Dragon" brought in an estimated $21 million in its debut, which is just OK for a Disney-backed movie. Fortunately though, "Pete's Dragon" only cost $65 million to produce — unlike Disney's other family film from a month ago.

"The BFG" cost the good folks at Walt Disney more than $140 million to produce, and the studio still hasn't broken even.

As for later this week, it's "bro-iest" war movie a frat house could ask for: "War Dogs" comes out Friday.