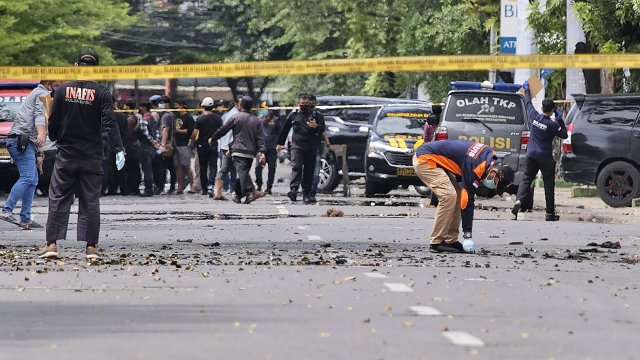 A priest at the church said security guards were moving toward two suspicious men when the bomb went off. Mass had just finished and some were starting to leave the church while others were coming in.

Police say both suspects were killed instantly, with evidence showing one was a woman.

The National Police spokesperson said police are still trying to figure out whether the two attackers were part of a the banned terror group, Jemaah Islamiyah, or if they were acting independently.

The country's president condemned the attack, saying "Terrorism is a crime against humanity that has nothing to do with any religion. All religions reject acts of terrorism for whatever reason."

Indonesia is the world's most populous Muslim-majority nation, and it's been battling militants and bombings since one in 2002 killed 202 people.