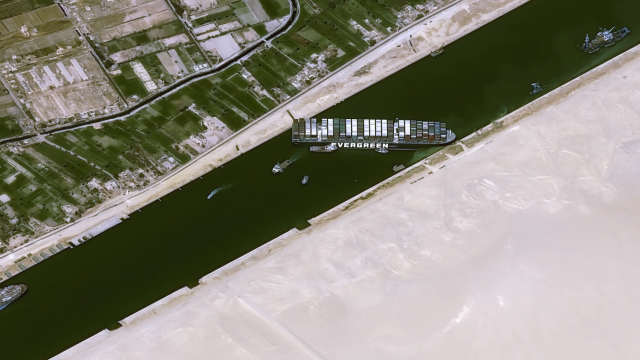 Officials are still trying to dislodge a massive cargo ship that got stuck in the Suez Canal earlier this week. It's been blocking traffic in this major shipping route.

The 200,000-ton ship has been stuck sideways in the canal for the past three days. And the longer the ships stays stuck the more likely we'll see a ripple effect of congestion in other major ports.

"With a cork being put in the Suez Canal, that now means a week from now, the northern European ports will not be receiving those port calls because the vessels are stuck down there," said SeaIntelligence Consulting CEO Lars Jensen. "And then the cork comes out, it is almost like a ketchup bottle, then you get both: All the vessels in the queue and the additional normal vessels coming into the northern European ports at the same time."

About 10 percent of world trade flows through the canal.