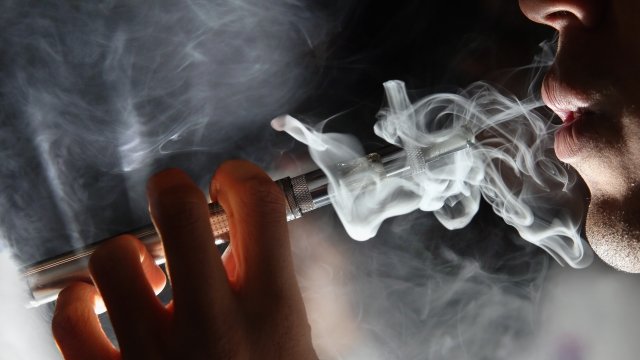 New research is pointing to a potential link between teens' tobacco product use and smoking marijuana later on.

According to a study published in the journal Pediatrics, young people who used e-cigarettes and hookah were much more likely to use marijuana later.

Researchers looked at more than 2,600 students from public high schools in Los Angeles. The students were asked at 14 years old if they'd ever tried hookah or e- cigarettes. A follow-up survey two years later asked the same students about their marijuana use. The findings showed that the students who had tried e-cigarettes when they were freshmen were more than three times more likely to have tried marijuana compared to students who hadn't tried vaping. The group that reported using hookah showed similar results.

It's not clear exactly why e-cigarette use preceded marijuana use. One tobacco researcher suggested that nicotine exposure could prompt central nervous system changes, leading to other drug dependence. Still, experts say the findings may not necessarily indicate a causal relationship and recommend more research.

The CDC reports an increase in young people using tobacco products, although conventional cigarette smoking has declined in that demographic. Earlier this year, the FDA started taking steps to cut down on vaping in young people, targeting companies that it says market to youths. The move was part of a broader regulatory plan launched last summer to prevent nicotine addiction.