Study Finds Cannabis Is Worse For Teens' Brains Than Alcohol 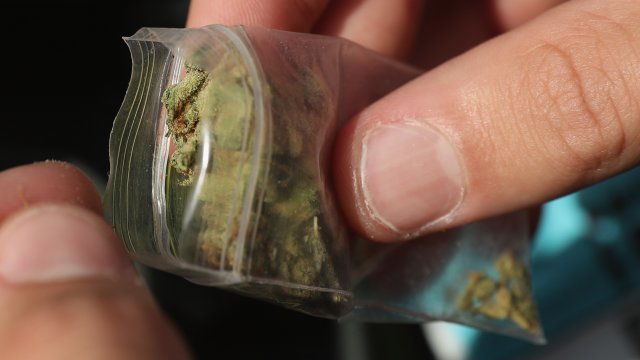 The analysis found the impact of cannabis on teens' working memory, reasoning and habit-breaking abilities was worse than that of alcohol.

The legalization of cannabis is clearly building momentum in the U.S and in Canada, which is the first G-7 country to legalize marijuana for recreational use.

Obviously, cannabis will still be illegal for minors in Canada, as it is in all U.S. states that have legalized it for adults. Still, a new study exploring the effects of the drug on teenagers' developing brains serves as an important reminder to policymakers. The analysis found the short- and long-term impact of cannabis on teens' working memory, reasoning and habit-breaking abilities was worse than that of alcohol. The study was published in the American Journal of Psychiatry.

"We were a little surprised by the findings," said the study's lead author, Patricia Conrod. "When we had initially designed the study, which is almost 10 years ago, we had actually expected alcohol to have a bigger effect on cognitive development, because at the time there was a lot more known about the effects of alcohol on cognition, less known about cannabis."

Conrod is a professor of psychiatry at the University of Montreal. Her research surveyed and tested almost 4,000 students in the Montreal area over four years, starting when they were around 13. While the negative effects of cannabis was more pronounced than that of teenage drinking, more students reported consuming alcohol than using cannabis. But that could change, Conrod says, as studies have found that the legalization process in Canada could cause an increase in cannabis use.

"Adults and young people become more and more comfortable with cannabis, have more liberal views about cannabis use, and do increase their use through that process," Conrod said.

The study is one-of-a-kind because it tracked the relationship between teenagers' cognitive abilities and substance use over time, revealing how long-lasting some of the effects were.

"This study really highlights the need for young people to consider delaying the onset of cannabis use for as long as possible during the adolescent years," Conrod concluded.

Conrod said: "This might be one mechanism by which early onset alcohol and drug use — particularly cannabis use — is implicated in future risk for addictive behaviors and cannabis dependence."

Conrod stresses that her study should not be used to morally condemn marijuana — especially at a time when more and more Americans view it favorably. Still, acknowledging the health risks associated with the drug is as important as ever.

"It's good that we're moving away from this negative view of cannabis use.  Is it morally any different than using alcohol? Tobacco? No, but that's not to say that it doesn't have health risks. There is no doubt that THC is an addictive substance. So depending on how it's ingested, it could have respiratory and carcinogenic effects like smoking tobacco, and that shouldn't be underestimated. So what's needed next, I think, is a study  that's designed in a very similar way, but that will test the extent to which cannabis has these kinds of effects in adults," Conrod says.

Another recent study says the link between young adults' cannabis use and cognitive deficits may be "overstated." But previous research shows that cannabis use among teens could lead to an increase in suicide attempts and psychotic episodes.