Student Says President's Progress On HBCUs 'Not Going To Cut It' 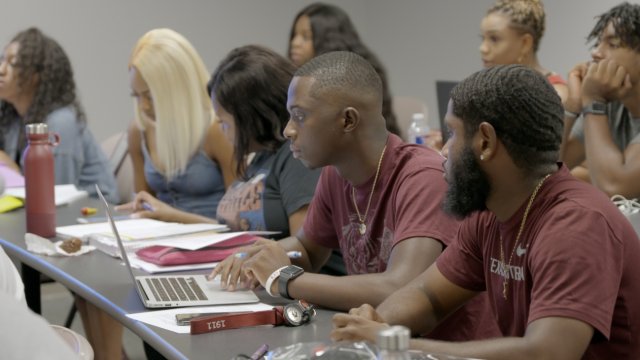 SMS
Student Says President's Progress On HBCUs 'Not Going To Cut It'
By Alexandra Miller
By Alexandra Miller
September 12, 2019
The Trump administration has increased funding to HBCUs, but it may not have helped the president gain support among students.
SHOW TRANSCRIPT

The pride at historically black colleges and universities like Texas Southern is palpable. But while pride attracts students, the lack of funding doesn't.

Debt is as much an issue here as any college campus. Yet just weeks into his first term, the president hosted HBCU leaders in the Oval Office, saying the schools would be a priority from the get-go. And Tuesday, the president renewed his commitment to the cause. But on the ground, students like Tyler Smith say almost three years later, they're still struggling.

The administration says over the last few years it's made more strides than other administrations, including increasing funding by double digits and relieving debt, nearly $330 million, for schools impacted by Hurricane Katrina. In fact, HBCUs have fared better in the president's budgets than other groups funded by the Department of Education, which has made sweeping cuts across the board.

In some cases, though, the 2019 House and Senate committees approved more funding for HBCUs than the president originally budgeted. The president's 2020 budget calls for funding of HBCUs at steady levels. While there have been increases directly to the schools, other educational cuts indirectly impact HBCU students.

HBCU grad and special assistant to the president Ja'Ron Smith says the administration is working "smarter" in other ways, by reinstating year-round Pell Grants. Students taking summer classes had previously not been able to utilize the grant during that time. Smith, who spends $37,000 annually on school, says it's not enough.

But for Smith, it's not just about the tuition. He says wants to see the school's facilities and course materials on par with other universities to help him be competitive as he applies for his first job.

Smith says the White House is focused on helping the universities prepare students through partnerships rather than continue to rely on funding.

But Smith says federal funding is vital. As the 2020 Democratic candidates debate at his school, Smith is hoping those running to replace the president agree.