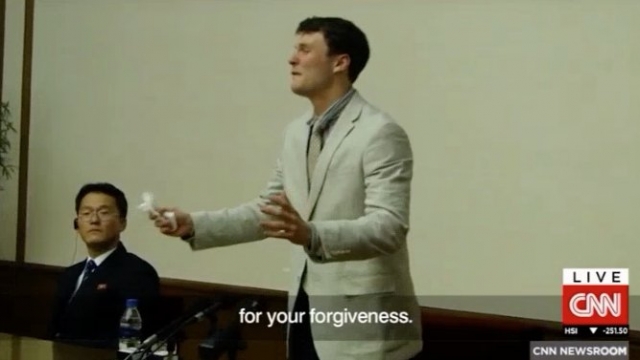 An American student who was arrested in North Korea roughly two months ago appeared in a press conference in Pyongyang on Monday, during which he appeared to apologize for attempting to steal a political banner.

"I entirely beg you and the government of DPR Korea for your forgiveness. Please, I've made the worst mistake of my life," Otto Frederick Warmbier said.

When University of Virginia student Otto Frederick Warmbier was first accused of trying to steal the North Korean banner from his hotel in January, state-run media said he did so under the American government's influence.

The 21-year-old said in his statement, "I never, never should have allowed myself to be lured by the United States administration to commit a crime in this country."

Warmbier also said a member of an Ohio church offered him a used car worth $10,000 to bring the banner back. It's unclear if his confession was coerced.

In the past, several people detained by North Korea have later recanted their statements after being released.