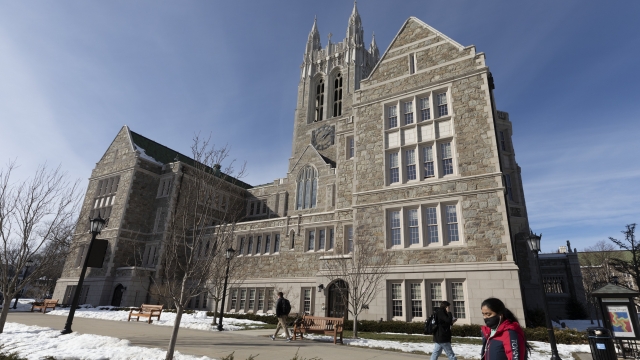 SMS
Student Debt Is Increasing, But Few Are Paying Full Price For College
By Katherine Biek
By Katherine Biek
March 3, 2021
Author Ron Lieber says roughly 90% of undergraduates in the U.S. receive some sort of a college discount, thanks to either financial aid or merit aid.
SHOW TRANSCRIPT

The cost of a college education has dramatically increased over the last several decades.

But very few students are actually paying full price. Thanks to both financial aid and merit aid scholarships, roughly 90% of undergraduates in the U.S. receive some sort of a discount.

Ron Lieber: "At many schools where there is rampant discounting, everybody gets a merit aid award, and it may depend less on your ability and more on what the school perceives the price would be that's necessary to get you to say yes."

Ron Lieber -- a columnist for The New York Times -- recently published a roadmap to help families navigate the complicated process of paying for college.

Lieber says schools use a variety of data to determine how much merit aid to offer prospective students, including their ZIP code, how much time they spend on the school's website and even how quickly they open emails.

Merit aid offerings seem to lead to higher enrollment. For example, the University of Alabama now spends almost $138 million on merit aid, up from roughly $7 million more than a decade ago. And since then, its enrollment has tripled.

But Lieber says it's important to recognize merit aid for what it is.

Lieber: "If everybody is getting a trophy, then merit aid is being used as a marketing scheme to make teenagers feel good about themselves and make parents feel like they're getting a gold star because they can run around town saying, 'My kid got an academic scholarship.' Which is technically true. But the school never really tells you that everybody's getting a pony here."

But even with all these tuition discounts, the Federal Reserve Bank of New York says student loans account for the second-largest portion of all U.S. household debt after mortgage debt.

President Joe Biden has said he's open to forgiving up to $10,000 in student loans per borrower. If that debt relief becomes law, more than 15 million borrowers could see their student loan debt completely erased.

Lieber: "It'll be helpful to have a better bottom line price from another school that competes directly with the one you were trying to get a better deal for. ... The only way you know how much that institution or that entity wants you is by actually asking and putting yourself forward."