Struggling Renters Fear What Will Happen If Eviction Moratorium Ends 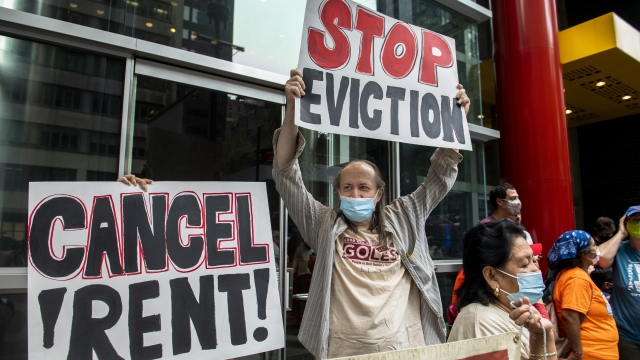 SMS
Struggling Renters Fear What Will Happen If Eviction Moratorium Ends
By Axel Turcios
By Axel Turcios
August 5, 2021
The moratorium bans eviction in areas with high COVID transmission, accounting for 80% of U.S. counties and 90% of U.S. renters.
SHOW TRANSCRIPT

"We are facing a humanitarian crisis," said the legislative director of Citizen Action of New York, Rebecca Garrard.

Millions of Americans are now behind on rent and on the verge of homelessness. Soon, they could be forced on the streets if the Biden administration's new eviction ban is halted in court.

One tenant, Nohemi Rojas, says she fears to end up homeless with her kids.

"Tuve miedo de volverme una homeless con mis hijos," she said.  "I was afraid of becoming homeless with my kids."

Rojas and her husband lost their jobs at the start of the pandemic and couldn't continue to make their $2,300 monthly rent payments. She said they are six months behind.

The new ban applies to parts of the country with high or substantial transmission of COVID-19.  It covers 80% of U.S. counties and 90% of the U.S. population who are renters.

"That is not only a housing crisis but a public health crisis," Garrard said.

If people don't have a place to live, the COVID transmission rate could skyrocket.

Citizen Action of New York, a nonprofit organization, has been at the forefront of the fight for tenants. Garrard says the housing emergency could cause a never-before-seen crisis of evictions and foreclosures.

"We have this huge amount of money," she said. "Tenants obviously need it in order to not be evicted and be displaced and unhoused. And we have small landlords who rely on that income to pay property taxes and mortgages."

Hamer is one of those landlords in the country that might lose their properties because their tenants have not paid their rent. He says he's missing an excess of $65,000.

He bought his four-bedroom Brooklyn apartment as an investment. It was meant as inheritance for his kids.

"I am telling you: Yes, I will lose my property. I can't tell you when, but I just know that it is inevitable."

On the other hand, Garrard says it could only get worse because the hardship is disproportionately impacting low-income and minority communities.

Such as Rojas’s family. She and her husband are undocumented.

They requested help after New York City allowed households like theirs to use federal funds. But still they haven't received any.