Streaming Companies Are Investing In Anime More Than Ever Before 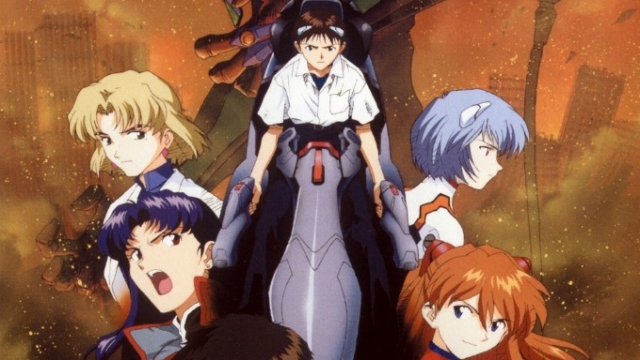 Netflix's Director of Content for Japan and Anime told Newsy: "Almost every country we're in has a pretty substantive pocket of anime fans."

This giant robot is from one of the most influential pieces of science fiction of all time: "Neon Genesis Evangelion."

It's okay if you've never heard of the show, because before this year, it was never really accessible to audiences outside of Japan.

Before we get to why that was, let's explain "Evangelion." The series came out in Japan in 1995, and it's about a team of teenagers that pilot giant robots to save the world.

There's a lot of action and comedy, but the show is also known for its religious symbolism, philosophical metaphors and portrayals of depression.

The show has influenced other anime and science fiction, and because of that, it's praised as one of the most important pieces of pop culture from the past three decades.

It's also been financially successful. The show's many sources of revenue include the box office, merchandise and DVD sales, music royalties, licensed pachinko machines — a popular form of gambling in Japan — and even a mini-theme park.

You'd think that fame would make it easy to find and watch, but for years, that wasn't the case. Because of licensing difficulties, "Evangelion" hasn't been on air in the U.S. since 2011. And despite the existence of anime streaming platforms, the show was really only accessible through illegal bootlegs and online piracy.

That all changed this year when "Evangelion" made its global streaming debut on Netflix.

John Derderian is Netflix's Director of Content for Japan and Anime. He was one of the key figures in bringing "Evangelion" to the platform.

"It's a great example of... what we're doing with anime, right? Where a lot of real core fans have never really had a chance to see it in its full flourishing because it's always been through kind of pirate sites or, y'know, secondhand kind of reference like that. Y'know, they get clips, they get partial versions. So, for us, it's a great honor to be able to give it to anime fans globally in a full expression of the show. Y'know, high quality rate dubs, great subs, all of the product elements that, y'know, I think we do really well."

Netflix has rapidly expanded its library of original anime — from just four in 2015 to more than 40 in 2019. It has more than 130 anime overall on its U.S. platform, and that number will likely climb as Netflix grows its base of anime fans.

"That kind of even ratcheted further when three... a little over three years ago, we went fully global through Asia, through other parts of the world. And then we saw this huge kind of love and engagement for anime really all over the world. Almost every country we're in has a pretty substantive pocket of anime fans."

Netflix's biggest competitors in the anime space are Crunchyroll and Funimation — two streaming services dedicated entirely to the medium. Heavy anime fans are more likely to gravitate to those services, which boast significantly larger libraries. But Netflix has the advantage of being a gateway for more casual anime fans or viewers new to the genre entirely.

"We call them the anime fans that don't know they're anime fans yet. So, y'know, if you're a really hardcore sci-fi fan, and you watch 'Altered Carbon,' you run into all sorts of sci-fi live-action, I think you might be an anime fan. But you maybe never had a chance to express it, because it wasn't kind of right in front of you, or you didn't know how to enter it, right? So, we give folks that opportunity through the personalization, and then having hopefully some of the best shows to kind of invite them into category."

Other streaming services are also getting in on the anime game. Hulu partners with Funimation and streams nearly 400 anime titles, while Amazon Prime Video exclusively released Studio Ghibli's original series "Ronja" back in 2017.

These new distribution channels mean a lot more money for the anime industry as a whole. In 2017, the industry made more than 18 billion U.S. dollars. The Association of Japanese Animations attributes a lot of this growth to the rise of online distribution and overseas sales.

Beyond anime, efforts from streaming companies to invest in non-U.S. media translates well for the entertainment industries of other countries — from South Korea and Spain, to India, which already produces the most films in the world.

It may sound hyperbolic to say that the streaming of a 24-year-old anime could impact international media this much, but the reality is: a pop culture icon that was once impossible to find is now globally accessible, and a genre that was once culturally niche is now legitimately mainstream.