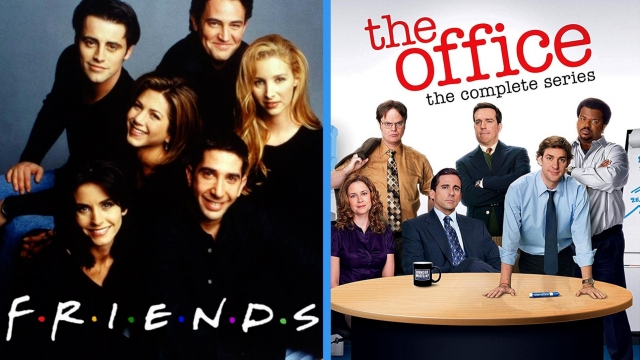 SMS
Streaming Companies Are Betting Big With Your Favorite Sitcoms
By Casey Mendoza
By Casey Mendoza
September 17, 2019
The streaming rights to "The Office," "Friends" and "Seinfeld" cost half a billion dollars each. Let's break down what that cost actually means.
SHOW TRANSCRIPT

Both "The Office" and "Friends" premiered over a decade ago with resounding success. Today, they're each worth half a billion dollars to streaming companies.

In case you haven't heard the news, these two popular sitcoms are leaving Netflix and moving over to forthcoming platforms from WarnerMedia and NBCUniversal. The cost to license and stream those shows is around $100 million every year for five years.

["Are we absolutely sure it's not an accounting error?"]

It's easy to scoff at those licensing costs as an outrageous amount of money for old shows — especially ones that are syndicated on cable television anyways. But let's break it down. "The Office" and "Friends" are Netflix's most popular shows. Last year, they accounted for more than 7% and 4% of all the platform's views, respectively. And at nine and 10 seasons, the long-running nature of the shows means old and new fans have guaranteed content to watch. Netflix paid between $80 million and $100 million to keep "Friends" on its platform for just one year, and it fought hard against Hulu, Apple and WarnerMedia for the streaming rights.

"Netflix was smart to keep 'Friends' and 'The Office' as long as they could. But those deals do end. So there's going to be somebody there to snatch it up."

Media analyst Rich Greenfield broke down the cost in more detail. In 2019, Netflix had more than 60 million U.S. subscribers, which means its deal to keep "Friends" cost between 11 and 14 cents per monthly subscription. It's unclear how much Netflix paid to license "The Office," but CNBC reports the platform was willing to pay $90 million a year to keep the sitcom — about 13 cents per monthly subscription.

Keep those numbers in mind, because it shows how much more expensive these licensing costs could be for new streaming platforms. Even if WarnerMedia's HBO Max gains 19 million subscribers this year — about half of its current U.S. base — then "Friends" will cost 37 cents per monthly subscription. If it only gains 10 million subscribers, the cost will be closer to 70 cents.

Despite the loss of "Friends" and "The Office," Netflix isn't bowing out of the legacy media game. Starting in 2021, the platform is set to stream another classic television sitcom: "Seinfeld."

The deal reportedly cost the company more than $500 million, but it's worth asking if the show is worth it. Back in 2015, Hulu spent between $130 and 160 million to stream the show for at least five years. But some sources say the show generated less than 1% of the platform's views.

Around the same time Netflix announced its "Seinfeld" acquisition, NBCUniversal unveiled the name of its own streaming platform: "Peacock."

The company has yet to announce exact prices, but it's important to note the platform will be supported by both ads and paid subscribers. If it can convert half of its 7.8 million total broadcast viewers to paid subscribers, "The Office" will cost about $2 per monthly subscription.

Beyond the Steve Carell-led comedy, Peacock will also reclaim exclusive streaming rights to "Parks and Recreation" in 2020. The show was previously a fan favorite on Hulu, Netflix and Amazon Prime, but it's unclear how much money NBC paid to take it back.

It's too soon to say whether these costs will be worth it in the long term, but these pieces of legacy media are clearly important to the streaming wars. Netflix is confident it can survive the content losses, but audiences are still likely to miss having access to their older faves.

"I think a show like 'Friends' or 'The Office' — those are shows that are like comfort food. And no matter what else is hot, and what else we're watching out there, we want to know we can go watch some 'Friends' when we just need to just sit back and just check back in with Ross and Rachel and the gang."