Steve Bannon Has Been Recruiting Candidates, Donors For 2018 Primaries 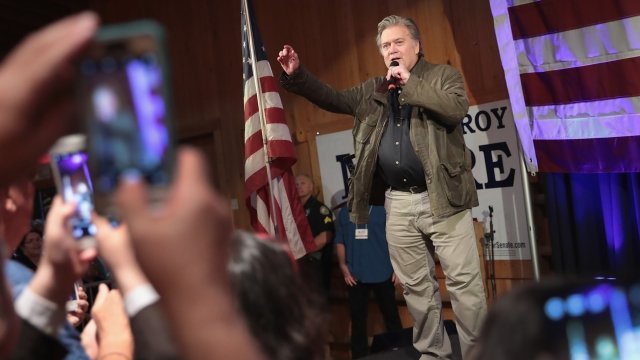 Former White House chief strategist Steve Bannon is organizing candidates to run against GOP senators in a move to shake up the party's establishment.

After leaving the administration in August, Bannon started cultivating grassroots, populist candidates — as well as big-money donors to fund them.

Those candidates would still have the tough task of beating entrenched GOP senators and their Democratic challengers in 2018. But The Washington Post notes well-funded primary challengers can usually come within striking distance of an incumbent.

The gambit could be a boon for President Donald Trump; a slate of hard-line, pro-Trump Republican senators could help spur the president's stalled legislative agenda.

Bannon's ultimate goal is reportedly to unseat Senate Majority Leader Mitch McConnell, whom he sees as the standard-bearer of establishment Republican policy.

Bannon has one super PAC ally in the effort. He's also held meetings with Republican mega-donors like the Mercers and hedge fund manager Scott Bessent.

Bannon's first project has been a success so far: Roy Moore — who was leading before Bannon got involved — beat out two other GOP primary candidates to run for the Alabama Senate seat vacated by Attorney General Jeff Sessions.

Now, Bannon apparently wants to repeat that formula in several other states.

Initial polls in Nevada and Arizona show Sens. Dean Heller and Jeff Flake already face an uphill battle toward re-election. Bannon threw his support behind Kelli Ward to challenge Flake and is reportedly in talks with Danny Tarkanian, Heller's challenger.

And even if Bannon's preferred candidates don't pull through the primaries, having several intense races is sure to rile the GOP establishment.