U.S. Governors Come Out Against Freeze In Fuel Efficiency Standards 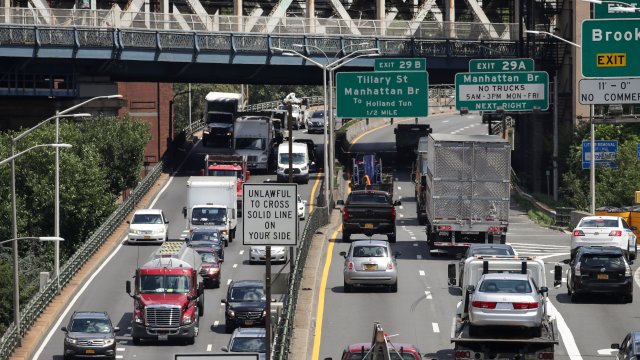 Twenty-three states and Puerto Rico signed a pledge to urge the Trump administration to drop its proposed freeze on fuel efficiency standards.

They're criticizing a plan to hold off on implementing stricter mileage standards. They say the freeze would have adverse effects on the climate and people's health.

Those states, which include California, New York and Illinois, are led by mostly Democratic governors. But they represent approximately 52% of the U.S. population. California previously filed a lawsuit asking for details behind the administration's plan. It's also leading another group of states that plan to sue if the Trump administration implements its plan.

Here's some background: The Trump administration confirmed last year it wanted to roll back an Obama-era mandate that would raise mileage standards for vehicles. The administration claimed this mandate would raise vehicle prices and force consumers to buy cheaper but less safe cars. Their proposal also blocked California from setting its own fuel efficiency standards.

Automakers, who have opposed the Obama-era mandate, have been pushing for a compromise. An industry trade group, which represents companies such as General Motors, Ford and Toyota, said it supports gradual increases in fuel standards but it's concerned about rising prices. The group adds, "It is untenable to face a marketplace with different standards in different states, but it is also untenable to face standards that rise so high that only a handful of electric vehicles can achieve them."