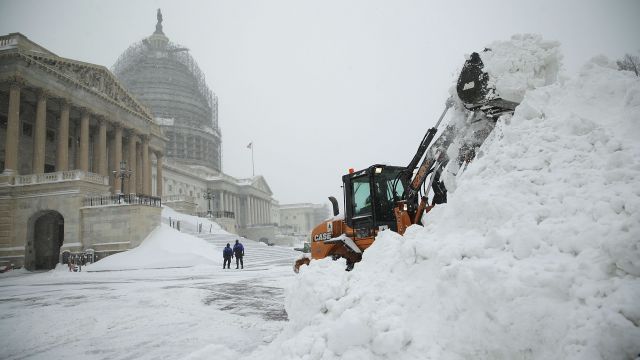 SMS
Epic Blizzard Delays The Final Batch Of Hillary Clinton's Emails
By Eugene Daniels
By Eugene Daniels
January 22, 2016
The State Department says it might release about 2,000 pages by the Jan. 31 deadline, but there would still be thousands remaining.
SHOW TRANSCRIPT

So far, Winter Storm Jonas has impacted driving conditions, flights and apparently the Department of State's ability to release the final batch of Hillary Clinton's emails while she was secretary of state.

The State Department filed a motion Friday asking for a one-month deadline extension. The main reason given is an "oversight" that led to more than 7,000 pages of emails not being reviewed by other agencies. But the motion also points out that the storm has hampered delivery of some of the documents.

The agency says: "Staff have been working extremely hard to process these emails, and we are committed to getting them out. The court's goal for this month’s production represented the largest number of pages to date."

The emails were supposed to come out on Jan. 31, the day before the Iowa presidential caucus. And now, the Republican National Committee is calling foul.

In a statement, the GOP said, "It's clear that the State Department's delay is all about ensuring any further damaging developments in Hillary Clinton's email scandal are revealed only after the votes are counted in the early nominating states."

Just last month, the agency failed to meet the 2015 email quota when 3,000 pages were missing from the December email dump.

Part of the reason is staffers from multiple agencies have to go through each page to make sure no sensitive information is released to the public.

The agency does expect it will release more than 2,000 pages by Jan. 29, with some people working over the weekend. But depending on the severity of the storm, that number could go down even more.