State Department Tells U.S. Citizens Not To Travel To Bolivia 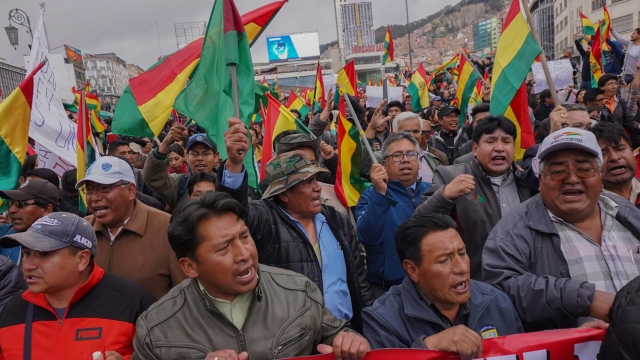 The U.S. State Department is ordering family members of government officials in Bolivia to leave the country in light of ongoing political instability.

The State Department's travel advisory also cautions U.S. citizens against traveling to Bolivia because of the civil unrest, including "recurring demonstrations, strikes, roadblocks and marches in major cities."

The protests have been going on for weeks. Protesters and opposition accused Morales of rigging the vote in October's election. Morales, who was the country's first indigenous president and had served for nearly 14 years, denied the accusations before resigning from office over the weekend.

Morales has described the situation as a coup by Bolivia's military and opposition. However, a senior State Department official said in a briefing Monday that the U.S. believes that claim is a "false narrative" and is "damaging" to Bolivian democracy.

Meanwhile, following the resignation of Bolivia's vice president and leaders of both chambers of Congress, Bolivian senator Jeanine Añez has declared herself the country's acting president. However, a boycott by allies of Morales left the legislative chamber short of the legal minimum number of lawmakers required to appoint her, according to CNN.

For now, the State Department's travel advisory for Bolivia is at level 4, meaning do not travel to the country.