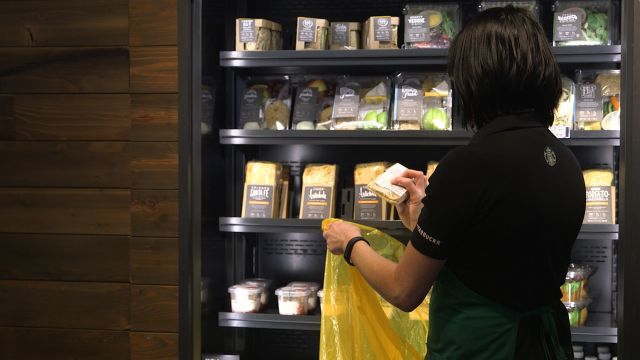 SMS
Starbucks Aims To Donate 100 Percent Of Unsold Food Items
By Katie Link
By Katie Link
March 22, 2016
Starbucks says that by the end of the year, it plans to donate about 5 million meals nationwide to people in need.
SHOW TRANSCRIPT

Coffee giant Starbucks wants to donate all of its leftover food to people in need. And by all, we mean 100 percent — every single unused food item from all 7,600 U.S. stores.

Starbucks already donates all of its unsold pastries, but CEO Howard Schultz says expanding the generosity to perishable food items took some planning.

"There are a lot of regulations, and I would say for the right reasons because the municipalities are just trying to make sure the food is safe to eat," Schultz told CNN.

Through a new partnership with Feeding America, refrigerated trucks will collect all unsold perishable food items and give them to those in need.

And according to Feeding America, a lot of people are in need. The nonprofit says one in seven Americans struggle with hunger.

By the end of 2016, Starbucks plans to donate over 5 million meals to those in need.

This video includes clips from Feeding America and Chipotle and images from Getty Images.