How 'Star Trek' Has Remained Socially Progressive Over Its 50 Years 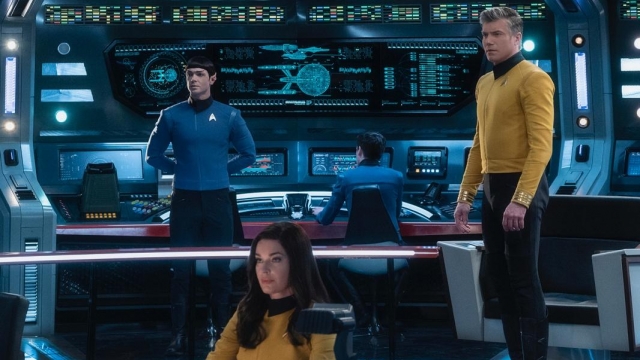 SMS
How 'Star Trek' Has Remained Socially Progressive Over Its 50 Years
By Casey Mendoza
By Casey Mendoza
May 3, 2022
Throughout its multiple spinoffs, "Star Trek" has continued to explore social issues, including race, gender, disabilities and more.

With its new series "Strange New Worlds" coming out this week, "Star Trek" is building on its progressive legacy.

Created over 50 years ago by Gene Roddenberry, the "Star Trek" franchise takes place in a fictional future with starships and intergalactic travel.

But as much as the series navigates through its futuristic science fiction landscape, Roddenberry always meant for the show to address the present fights for peace, disability rights, and racial and gender equality — pushing forward on-screen and off the Vulcan philosophy of "infinite diversity in infinite combinations."

"He made no secret of it, he set out to create these as morality plays, to create inclusion during the civil rights era, which was extremely urgent," actress Chase Masterson said.

Like its predecessors, "DS9" homed in on war and interspecies conflict, and it was the first in the franchise to be led by a Black captain, Benjamin Sisko, played by Avery Brooks.

"I'm grateful to be part of a legacy that carries them forward, and that actually paints the picture of a brighter future where everyone has a seat at the table," Masterson said.

From Nichelle Nichols and George Takei in the original series to LeVar Burton in "The Next Generation" and Michelle Yeoh and Ian Alexander in "Discovery" — the franchise has been lauded for its history of on-screen representation.

Star Trek's exploration of social issues not only touched on race and gender but disabilities, foreign cultures and man's relationship to technology.

This year on "Discovery," the series featured voting rights activist and progressive politician Stacey Abrams in the role of Earth's president.

Off-screen, Abrams remarked on how the series reminded her of the importance of activism.

That interest is shared with other "Star Trek" actors, like LGBTQ activist George Takei, as well as Masterson. In 2013, she started the nonprofit Pop Culture Hero Coalition, which uses the narratives of justice and heroism in film and TV to combat bullying in schools.

"What began as a small movement in 2013 has become a national program," Masterson said. "The coalition set out to end bullying, racism, misogyny, LGBTQI+ bullying, cyberbullying and other forms of injustice."

The organization partners with the YMCA and works with 200,000 kids around the country. Masterson says her time on "Star Trek" inspired her to use pop culture to help teach kids about diversity and inclusivity.

"We can bring those stories of heroism that we love on screen and make some happen in real life," Masterson said.

The future of "Star Trek" continues with five shows currently in production — each one inviting audiences to a more inclusive world.