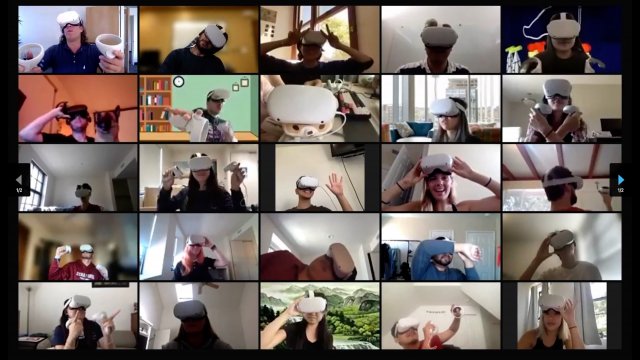 SMS
Stanford Virtual Reality Class Immerses Students In Metaverse
By Jason Bellini
By Jason Bellini
December 8, 2021
Students present in the form of an avatar loosely based off how they look in real life for the virtual reality class.
SHOW TRANSCRIPT

One Stanford University class's core curriculum is to exist in, wander about and explore virtual environments.

Professor Jeremy Bailenson has been teaching students at Stanford Univerity about virtual reality, or VR, since 2003, but he only began teaching fully in VR this summer.

It's a moment when VR is being touted by the founder of Facebook as the next-level social network, "...giving everyone the tools to be present, no matter where they are – whether as a hologram sitting next to you in a physical meeting or as a discussion taking place in the metaverse."

The metaverse is defined as a highly immersive virtual world in which the fantastical is possible.

"We've built an internal metaverse, I like to call it," Bailenson said.

And in this metaverse, each student's own presence presents in the form of an avatar.

"Avatars are all about tying your body movement to you," Bailenson said. "What our research has shown is that people form psychological ownership to those bodies, so if you wear a body, an avatar, for half an hour an hour, it feels like your body and psychologically you treat it as your body."

But the avatars still have rules.

"Your avatar needs to be... loosely defined, we want it to look like how you look in the real world," Bailenson said.

Realities of Silicon Valley help explain, the professor says, why his is now among the most popular courses on campus.

"I can now stand up in front of all my students and there's, you know, two hundred in the class, and I can say you will actually have a better chance of getting a job in the Valley because of taking this class because as of about a year ago, the most sought-after job in the Valley went from a data scientist to a VR engineer," Bailenson said.

Though the Stanford course isn't about how to engineer the metaverse, it teaches students what it means and how it feels to be human in environments that only exist in one's mind.

"We have VR journeys," Bailenson said. "The VR journeys are where everyone just descends upon a place. We'll all go and do a class together on meditation and do paced breathing. We're in space looking down at the earth while we're doing the space breathing exercise."

The equipment, which costs $300 to $400, is loaned out for the quarter to everyone taking the class. Its use is required for weekly small group discussions led by teaching assistants.

"Sometimes there's a campfire, so they can grab a seat," Eugy Han, Stanford Univeristy teaching assistant and PhD student, said. "But what tends to happen is that students form a circle naturally."

"All of a sudden this problem that we have on Zoom, which is new, of never knowing where someone's looking... in VR, all of a sudden non-verbal communication, it actually has meaning again because head movements, personal space, where you're looking, how you're standing in VR, that works the way it does in the real world," Bailenson said.

One electrical engineering student who took the course over the summer said it's more authentic than some digital communications.

"I come in with the curious mindset, so it is all very fun and gadgetry," Annie Nguyen said. "Feeling like you're in some sort of dedicated space with people is one of the bigger differences between, like, a Zoom meeting."

Nguyen said it was hard to give her headset back at the end of the course.

"One of our final projects is like designing our own like little 3D environment," Nguyen said. "I love doing that, and I had so much fun designing it and I honestly didn't want to give it back because I would, you know, lose access to the thing that would let me see it."

Professor Bailenson said when he got student evaluations back at the end of the summer, some students said they had very intense experiences, specifically with trainings on VR empathy that included teachings about scenarios like becoming homeless and living in solitary confinement.

"VR is intense, and the things we tend to do on VR aren't about mundane things," Bailenson said. "They tend to be about things that are "aha" moments. So in the fall, we really built up an infrastructure to mentally prepare people for these intense simulations and to help them understand how to how to exit them as well."

Mental preparation for a world in which they, and perhaps everyone, may soon be living as "virtual humans."