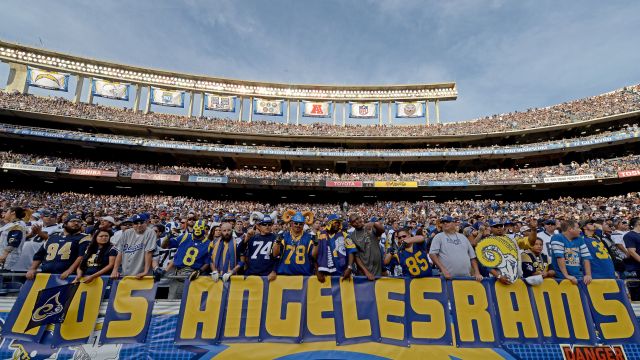 By Jamal Andress
April 27, 2016
It doesn't get much more St. Louis Rams than future Hall of Famer Kurt Warner, but he tells Newsy he understands why the Rams are heading west.
SHOW TRANSCRIPT

The most talked about NFL team this offseason is undoubtedly the LA Rams, and that's largely because just months ago they were the St. Louis Rams.

"You always have mixed feelings with things like this." Kurt Warner, one could argue, was the St Louis Rams' biggest star.

In other words, it doesn't get much more St. Louis Rams than Warner. That being said, he understands why the Rams are heading west.

"Anytime you're in this business, whether it's as a player or on the outside looking in, you realize it is a business. ... There were obviously some struggles with putting fans in the seats. ... And I understand LA because when I was playing in St. Louis we had a built-in fan base in LA," Warner said.

And Rams management hopes those fans will be all in on the new team. The Rams' new stadium in Inglewood, California, is a 300-acre, $2.6 billion marvel. When completed, the Rams' new home will be the NFL's largest and most expensive stadium.

"My hope is just that they support it this time. What would be really disappointing is if you take it from St. Louis and you take it to LA, and they don't support it in LA, so now you're back in that same mold," Warner said.

LA has the first pick in this year's NFL draft, and many are expecting the new California team to take the University of California's top prospect, Jared Goff.