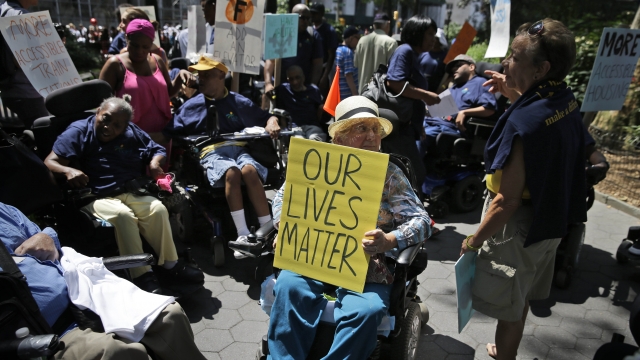 Under the name Crutches & Spice, she uses social media to shed light on disability rights, inclusion and racial justice.

"That's kind of where my advocacy starts and ends is making sure that disabled people feel heard and feel like they're no longer isolated due to disability," Barbarin said.

With more than 140,000 followers on Twitter and 370,000 followers on TikTok, Barbarin shares her experiences as a disabled Black woman and encourages others to do the same through viral hashtags like #TheCostOfBeingDisabled and #PatientsAreNotFaking.

"How other people see me because of my disability should not dictate how I see myself," Barbarin continued.

Over 1 billion people in the world live with some form of disability — and the World Health Organization says that number is dramatically increasing because of a rise in chronic health problems and an aging global population.

The pandemic — which Barbarin has called a "mass disabling event" — sparked more conversations about the barriers to access health care, the necessities of working from home and the importance of strengthening public health systems. But Barbarin notes that many of these discussions have been happening for years in the disability rights movement.

"Literally every single thing you could think of affects the disability community, because we represent everybody," she said.

There have been a number of important activists from the Black community, which has one of the highest rates of disability among racial groups in the U.S.

Disability rights activist Lois Curtis, who lives with cognitive disabilities, served as a plaintiff in the landmark Supreme Court case that established the rights of people with disabilities to live independently within communities.

Civil rights activist Fannie Lou Hamer, who lived with several disabilities and is famous for saying "I'm sick and tired of being sick and tired," advocated for better food access, housing programs and voting rights for disenfranchised Black communities in Mississippi.

And Black Panther Brad Lomax, who had multiple sclerosis and has been called the "the bridge" between the racial justice and disability rights movements, organized protests to uphold the law that prohibits discrimination on the basis of disability.

"We are in a community that is very vulnerable, meaning that a lot of the people that we look up to die very young. … But in their time here, they made sure to have their voices heard, which is exemplary in my book," Barbarin said.

"Making sure that all of these policies, regardless of what they are about, have disabled people in mind — that is my goal," Barbarin said.

Her work today is galvanizing the disability community and making sure their movement doesn't go ignored.