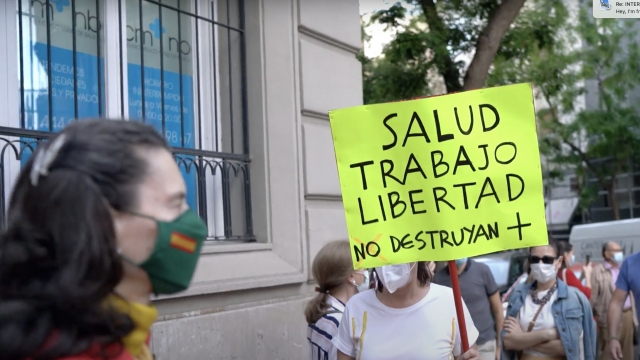 SMS
Spain’s Slow Approach to Reopening is Different From Others in Europe
By Amber Strong
By Amber Strong
May 21, 2020
Daily deaths in Spain have dropped below 100 for the first time since mid-March, prompting people who say the lockdown should end to protest.
SHOW TRANSCRIPT

In Spain this week 70% of the country began Phase I of a four-phase reopening, but major metros like Madrid and Barcelona remain relatively locked down.

Those in Phase 1 of the Desescalada can exercise outside. They’re also allowed to visit friends in the same province as long as there are no more than 10 people present. Bars and restaurants are open to outdoor seating with limited capacity.

Nationwide, masks are required for anyone over 6 years old where social distancing isn’t possible.

“Yes [it is uncomfortable] for everyone, but if you are in a space without people you take it off,” a Barcelona resident said.

The phases are implemented at different times in different areas based on things like hospital capacity.

Daily deaths in Spain have dropped below 100 for the first time since mid-March, prompting people who say the lockdown has gone on long enough to protest.

This was the scene on Wednesday as Spain’s Prime Minister Pedro Sánchez urged parliament to approve a two-week extension to the country’s state of emergency.

That fanned the flames of conservatives already angry about nationwide restrictions, which have been some of the toughest in Europe.

"Many cities and villages around Spain are united in this.  Every day  we are getting more and more,” said one protester.

But that isn’t the view of all Madrileños.

“Those are the neighbors, keeping the spirits high, they play music for everyone,” said English Professor Daniel Caceres.

He says instructions from the government haven’t always been clear but he’s trying to give it the benefit of the doubt on restrictions.

“The WHO was learning, basically on the go. And if you read the news, there's, every week there's something new about this virus. So it's very difficult to know what the proper measures are,” said Caceres.

Spain is opting to keep its borders closed to tourism despite the huge economic impact.

According to Spanish Newspaper, El Pais, Prime Minister Sanchez will likely ask for another lockdown extending into late June.