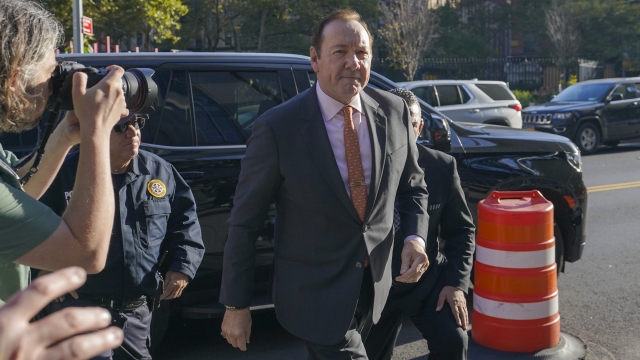 Actor Anthony Rapp is seeking $40 million in damages, claiming Spacey made a sexual advance on him in 1986 when he was 14 years old.

The lawyer for actor Kevin Spacey has tested positive for COVID-19, but the week-old civil sex abuse trial resumed Thursday with testimony from a psychologist.

U.S. District Judge Lewis A. Kaplan said his first concern after attorney Jennifer Keller tested positive Thursday morning was to ensure that the jury was safe and courthouse protocols were followed. He said all jurors have been at least partially vaccinated.

The 62-year-old actor faces four counts of sexual assault and one count of causing a person to engage in penetrative sexual activity without consent.

Keller, who was not in the Manhattan courtroom Thursday, questioned actor Anthony Rapp on Wednesday about his claim that Spacey made a sexual advance on him in 1986 when he was 14 years old. At the time, Spacey was 26. Spacey, now 63, has denied Rapp’s claim.

It was unclear how the trial would proceed after Thursday. Kaplan said the trial might be postponed until next Wednesday so at least two jurors who might have been near Keller when she was questioning Rapp could be tested for the coronavirus in a few days to ensure they did not contract the coronavirus. Facemasks are optional in the courtroom and Keller was not wearing one Wednesday.

Rapp's lawyers were nearing the end of the presentation of their case against Spacey when Keller got sick. A lawyer for Spacey said she showed symptoms late Wednesday night.

On Thursday, members of Spacey's defense team, including Spacey, and members of the jury wore masks in the courtroom along with anyone else who had been in close proximity to Keller. When an aide to the judge offered coronavirus home test kits to anyone who wanted them, Spacey and others at the defense table raised hands.

Testimony in the trial so far has focused on Rapp's claim that Spacey approached him after a party at his Manhattan apartment in 1986 while Rapp was sitting on a bed watching television.

Production company MRC says it lost money after sexual misconduct allegations against Spacey forced the company to remove him from the show.

Rapp, now 50, testified that Spacey lifted him onto a bed and pressed his clothed body against Rapp's clothed body before Rapp squirmed out and ran into a bathroom before leaving the apartment.

Through his lawyers, Spacey has denied that the encounter ever happened, though he has not yet testified. He arrived later than usual at the courthouse Thursday.

Rapp is seeking $40 million in damages for what he describes as psychological harm.

Lisa Rocchio, a forensic psychologist who examined Rapp, testified on Wednesday that he had experienced “a tremendous amount of shame, guilt and confusion” after his encounter with Spacey.

Her testimony resumed Thursday, when she told jurors that Rapp experienced delayed-onset post-traumatic stress syndrome that was triggered by reports that movie mogul Harvey Weinstein had been accused of sexual abuse by numerous women.

Rocchio was asked how Rapp could have been traumatized if there was no sexual contact and he got away.

“The trauma is in the needing to flee,” she said.

The Associated Press does not usually name people alleging sexual assault unless they come forward publicly, as Rapp has done.