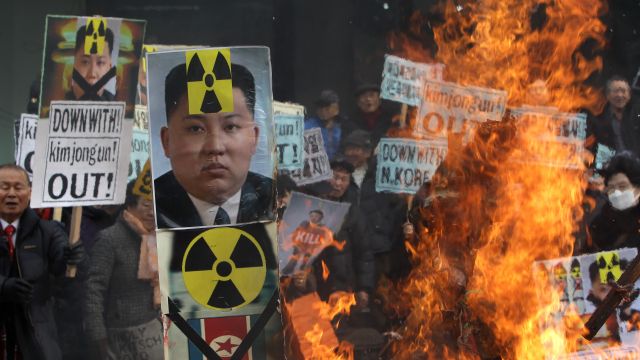 SMS
One Wrong Move And This Country Says It's Ready To Kill Kim Jong-Un
By Melissa Prax
By Melissa Prax
September 23, 2016
South Korea is continuing its threats against North Korea over nuclear tests.
SHOW TRANSCRIPT

South Korea says it has a plan to deal with a North Korean nuclear threat — kill Kim Jong-un.

So how would South Korea carry out something like that?

According to the defense minister, through an assembled special forces unit and by using "precision missile capabilities."

This comes after South Korean Yonhap News Agency cited a military source who said North Korea's capital would be pummeled over a nuclear threat.

North Korean media released a statement with a similar sentiment — that a threat from the South would cause the North to target and destroy Seoul.

North Korea has said it's beefing up its nuclear program, and the country recently completed its fifth nuclear test. It's caused unease throughout the international community.