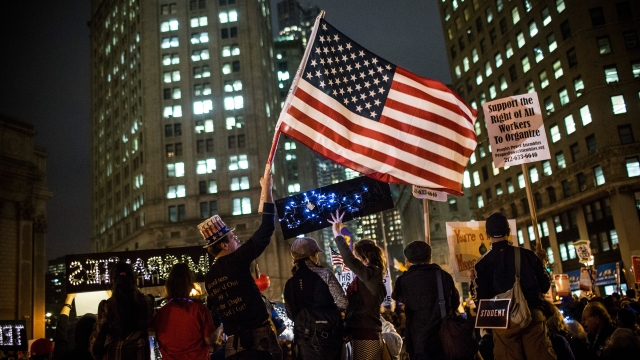 Organized labor in America has taken a hard fall in the last half-century.

It was a tough climb to that peak with long, even bloody battles fought for union rights. Here are just a few of the most noteworthy and influential.

In 1894, Pullman Palace Car Co. workers went on strike. At issue for the railroad car manufacturing workers near Chicago: Their already low wages were cut, while their living expenses in Pullman — a town owned by the head of the company — remained the same. The American Railway Union refused to handle trains with Pullman cars.

The strike resonated with workers nationwide, leading to strikes in more than 20 states, involving an estimated 260,000 men. It brought many of the nation's railroads to a standstill. A federal injunction was issued, allowing President Grover Cleveland to send troops to Pullman.

Though the troops’ presence was supposed to bring order, demonstrations became violent and destructive and as many as 30 people were killed. The Pullman company ended up rehiring workers, but they had to promise they'd never join a union. The town was sold off after the Illinois Supreme Court ordered the company to sell it in 1898.

While some cities and states were celebrating Labor Day as much as a decade earlier, Cleveland signed a bill into law making it a federal holiday in the midst of the Pullman strike.

Just a few years later, mine workers in eastern Pennsylvania wanted higher wages and shorter work days, among other things. But owners of the companies wouldn't meet with the union, United Mine Workers of America. So the workers went on strike in May 1902.

The strike led to skyrocketing coal prices, and by fall, President Theodore Roosevelt was convinced the prolonged strike could have huge political ramifications in the upcoming election. He ended up meeting with both sides of the fight but couldn't reach a deal.

Both sides ended up agreeing to follow the findings of a commission set up by Roosevelt. The union ended up getting some of what it wanted. Miners got a 10 percent pay increase and had one hour shaved off their workday.

The conflict marked the first time the federal government acted as a mediator in a strike.

Though the number of wage and salary workers largely declined after 1954, it reportedly saw a slight uptick in 1970. That's the same year a very public labor dispute gripped the nation.

New York postal workers voted to go on strike March 17, 1970, after the U.S. House of Representatives voted to increase its own pay by 41 percent, while limiting postal workers' wage increase to 5.4 percent. According to the office of the U.S. Postal Service Inspector General, over 150,000 workers from 671 locations went on strike.

Despite large fines and the fact that federal workers weren't allowed to strike, postal workers wouldn't cross the picket line. President Richard Nixon had members of the military deliver mail in their absence. The strike ended after two weeks, and workers got a retroactive wage increase. Congress also passed the Postal Reorganization Act, which allowed collective bargaining and provided the opportunity for workers to reach the top of the pay scale in eight years.