To Knock Or Not To Knock? Campaigning During A Pandemic 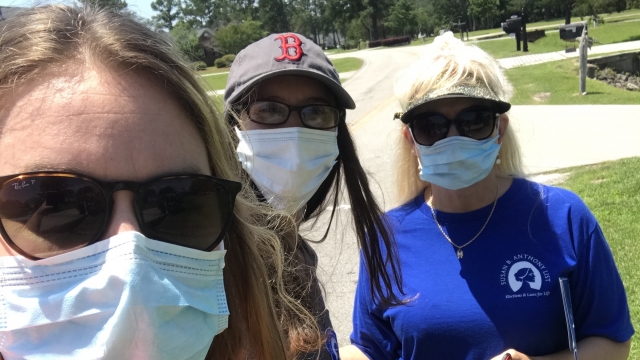 SMS
To Knock Or Not To Knock? Campaigning During A Pandemic
By Amber Strong
By Amber Strong
June 10, 2020
While some groups are trying to figure out safe ways to resume door-to-door canvassing, others steer clear.
SHOW TRANSCRIPT

“We had a pretty good one. He wasn’t even on our list,” remarked a volunteer.

In January, anti-abortion super PAC Women Speak Out announced plans to knock on 4 million doors and spend $52 million to reelect President Trump and candidates like him.

And they were well on their way when COVID-19 began to spread.

“Out of concern for not only the safety of our canvassing team, but of course the voters that we're trying to reach, we immediately pulled everyone out of the field,” stated Mallory Quigley, VP of communications for the Susan B. Anthony List.

But as stay-at-home orders begin to lift in certain areas, the group is slowly heading back and engaging in person with voters.

They say the reactions have been good, with people simply excited to see another human being.

“For years, door knocking has been the traditional way of measuring voter enthusiasm and fostering get-out-the-vote efforts.”

But other political action committees are steering clear and using the COVID-19 outbreak to lean into their digital strengths.

“I am going to share my screen and we will get started,” said Nick Guthman.

Blue Future co-founder Nick Guthman is leading the next generation of Democratic voters.

“They will all get on a Zoom call and then put everyone on mute and start calling voters. And so they did remote phone banking parties, or text parties,” said Guthman.

Now, their political work is entirely online and will stay that way for a while.

Guthman says young people are fired up right now about social injustices like the death of George Floyd. He is hopeful that and a somewhat innate knowledge of technology could fill the void of traditional door knocking and canvassing for now.

“We launched our summer program expecting to recruit about 50 organizers...we had over 450 students who wanted to be part of the program," said Guthman.

When it comes to the presidential campaigns, President Trump and the RNC are moving forward with in-person canvassing.

On the flipside, a DNC spokesperson tells us they will continue to reach voters through quote “appropriate tactics," saying they’ve reached millions of voters in battleground states after the launch of text messaging banks.