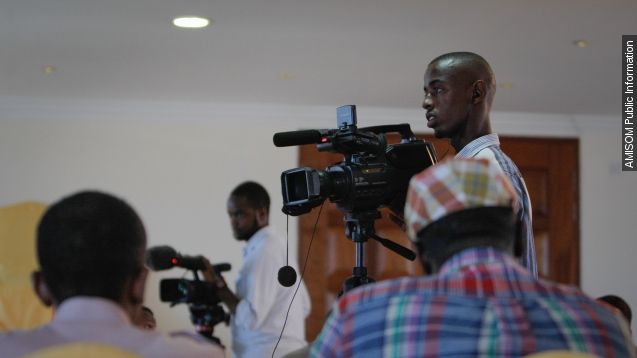 SMS
Somalia's New Media Laws Could Decimate The Country's Local Reporting
By Melissa Prax
By Melissa Prax
January 16, 2016
Somalia now requires its journalists to have a degree, which could hinder the reporting in an already underreported part of the world.
SHOW TRANSCRIPT

Global media coverage of Africa has long been criticized.

But recent changes to media laws in Somalia could make it even harder for local media to cover stories. (Video via Somaliland National TV)

Somalia is now requiring all journalists to have a degree. But the country has only one undergrad program that started a few months ago, so it could make it difficult for many to stay in the field. (Video via Somalia Broadcasting Corp.)

Proponents say that as Somalia heals from its civil war and problems with propaganda, this law could help journalists be better prepared to report on issues like violence. (Video via PBS)

Somalia has been recognized by the Committee to Protect Journalists as one of the most dangerous countries for journalists, where dozens in the media have been killed in the past decade. (Video via CCTV Africa)

Somalia isn't the only African country to propose something like this. Just a few days ago, Uganda banned journalists from covering Parliament unless they had a degree. (Video via NTV Uganda)

Journalism in the U.S. and other Western countries doesn't require a diploma, and for some older journalists, experience has propelled them through their career. (Video via Syracuse University)

But even before these rules, media companies throughout the African continent didn't have the same resources to compete with Western journalists' coverage. (Video via BBC)

A CBS 60 Minutes profile was criticized for not including African voices, a problem criticized in other global media.

Somalia's law has another provision: It says that stories coming out of government-owned publications can't be censored. (Video via Somali National Television)