Soldiers From Both Koreas Cross DMZ For Historic Inspections 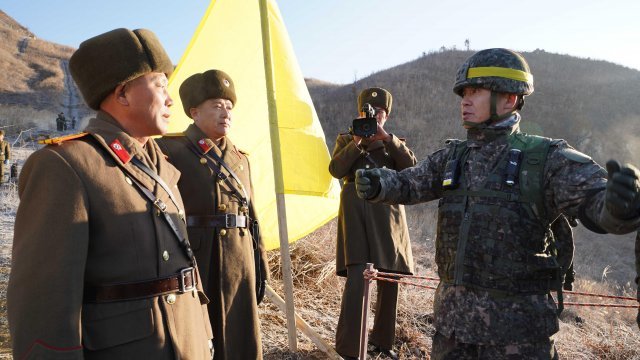 SMS
Soldiers From Both Koreas Cross DMZ For Historic Inspections

By Sebastián Martínez Valdivia
December 12, 2018
The North and South have been removing guard posts along the DMZ as both countries move to improve relations.
SHOW TRANSCRIPT

For the first time since the demilitarized zone separating the two Koreas was created, soldiers from both countries have crossed it in peace.

On Wednesday, inspection teams crossed the DMZ to verify the removal of guard posts along the heavily fortified border. The two countries had agreed to remove a total of 22 posts by the end of November.

North Korea still reportedly has a major advantage when it comes to guard posts — it maintains about 100 more than South Korea. But the removals are part of a push by the two countries to improve relations, and more collaboration is planned over the coming months.

The inspections come despite stalled denuclearization talks between the U.S. and Pyongyang. While North Korea has said it's open to allowing nuclear inspections, it has demanded the U.S. remove some economic sanctions first.