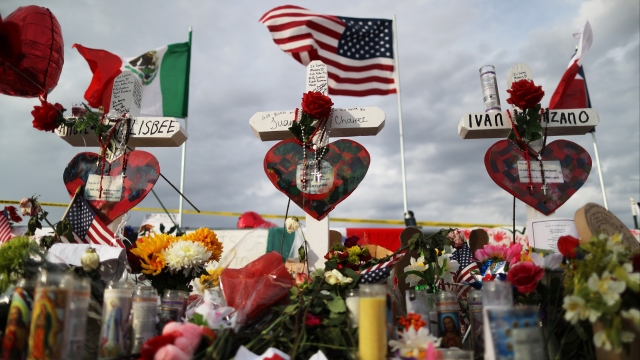 Sociologists James Densley and Jillian Peterson have analyzed every mass shooting in the United States since 1966. In an op-ed co-authored in the Los Angeles Times, they argue the key to preventing such extreme violence may lie in understanding what the perpetrators have in common.

In an interview with Newsy, Densley, who is a criminal justice professor at Metropolitan State University, expands on these four traits prevalent among mass shooters: They suffered early childhood trauma and exposure to violence at a young age. They are angry or despondent over a recent event. They have studied mass shootings online and found inspiration. And they possessed the means to carry out an attack.

"We feel like there's no one profile of a mass shooter, there's no one reason why someone perpetrates this particular act of violence. To give you an example, you could say that the shooting that happened, just the terrible shooting that happened at the Walmart in Texas, was a white supremacist hate crime. And that is a nice way to kind of put it in a box and think about what the motivating factor was.  But I think the important thing is to think about that, what propels somebody to white supremacy in the first place?"

Professor Densley says the story of such perpetrators extends well beyond any online screed they may post. It's because the shooter's ideology has a necessary companion in their life's trajectory.

"Often  times, you will find that the ideology is quite thin. People will sort of make claims and write manifestos. But deep down, there's not a deep understanding of white supremacy and these issues...Instead It's something you can sort of hang your hat on it. It can make you feel like you're part of something bigger. So I say all that, because we want to sort of go backwards and think, Okay, what got somebody to that point in the first place. And usually, what we find is that these are very vulnerable individuals, individuals who have experienced trauma, some sort of traumatic and troubling childhood growing up, they may have experienced some sort of crisis point."

Densley fears mass shootings are being normalized into the fabric of American society by blaming them on mental illness or whatever lies in "the darkest corners of the internet."

"And again, it's not always a mental health crisis, that's the other important piece it, it can be something like losing a job or losing a loved one. But it can be something that pushes somebody to the edge where they feel like life is no longer worth living. And that there is a solution to my grievance that violence would create. And so, in our culture, we don't have a script to follow. We've seen so many of these mass shootings, and we can go online and find people that will endorse them, and find ideas that will facilitate them. And I think that when you put all that together, the final piece of the puzzle becomes, well, can I actually perpetrate this crime?"

So Densley says American society and political leadership must work harder to prevent mass shootings before they happen. By detecting signs of people in crisis. And by understanding suicidal impulses at the core of mass violence.

"So the first thing is we have to become much more attuned to the signs of a crisis. And that's  not just to prevent mass shootings. This is just to also be thinking about violence prevention, more broadly. We know we're in the midst of a suicide epidemic in this country, a lot of people are hurting and struggling at the moment. And we have to be more attuned to them."

The other critical element, Densley says, must be blocking that 4th element - acquiring the means of carrying out a mass attack.

"And I think the other piece about this is it always comes down to gun safety. And they're are, I think, simple measures that can be taken, where the evidence suggests that they're not going to infringe upon the constitutional rights of law-abiding Americans, but they can at least slow down the access to weapons, particularly for people who are in crisis."

And he says passing some sort of gun legislation is an essential part of the prevention puzzle.

Editor's note: A previous version of this story said Densley and Peterson had studied every mass attack since 1996. This story has been updated.