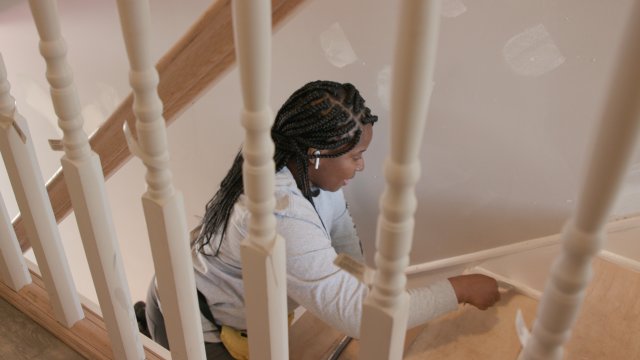 "Now that the COVID-19 has hit, there aren't too many customers calling for flips," said Tianna Edwards. "It's more emergency calls. Like, underneath my sink is leaking, my tub is leaking into my living room and my dining room. So it has slowed down tremendously."

She had hoped to find help through the federal Paycheck Protection Program, or PPP.

But Edwards won’t be getting the loan any time soon.

"Unfortunately, I have a criminal background," said Edwards.

As a result, Edwards does not qualify for the PPP, a Small Business Administration loan offered under the CARES Act. It's even more restrictive than its regular loans under the same program.

The loan excludes small businesses where a stakeholder who owns 20% or more of the company is currently on probation or has had a felony conviction within the last five years. That includes Edwards.

"The fact that I can't get this loan during a pandemic," said Edwards. "It upsets me a little bit. I feel like I did my time. My time was served."

Edwards is on probation after serving time in prison for charges related to a daycare she ran, including manslaughter after a child drowned in a pool, and wire fraud.

"I've changed. Everybody has a past," said Edwards.

"Particularly for someone who has the challenges of a prior criminal record, this is a program that can be a lifeline for their business and for their employees," said Sen. Ben Cardin.

Sen. Cardin sent a joint letter with Sen. Rob Portman to the U.S. Treasury Department and the SBA, writing, "The rule should not deny assistance to people with criminal records who have turned their lives around."

The senators are asking the agency to eliminate the restrictions, saying it’s a relatively simple fix: Just change the application.

"We were doing everything, as you know, on a bipartisan basis these days to try to encourage people," said Portman. "[Those] who turn their lives around, do things like starting a new business, hiring other people and contributing to the community. And it seems to me it was strange that we were penalizing people who had done just that."

The rule seems to contradict another major bipartisan milestone.

"Both parties united for groundbreaking criminal justice reform. They said it couldn’t be done," said President Trump at the 2019 State of The Union Address.

The First Step Act, signed into law in 2018, aimed at addressing disparities in the criminal justice system.

"America is a nation that believes in redemption," President Trump continued in the speech.

Newsy reached out to the Small Business Administration, but they did not respond to requests for an interview.

Those pushing for a change in the regulations say it's urgent because the unemployment rate for people who have formerly been incarcerated is nearly five times the rate of the general U.S., according to some estimates.

As a result, according to experts, many end up starting their own businesses because they’re often shut out of traditional employment.

"Using prior criminal history as a barrier for relief really locks out a lot of communities that are really needing this relief and only exacerbates these problems of inequitable access that we're seeing with the program overall," said Jamie Gullen of Community Legal Services of Philadelphia. "And that's because we know that there are so many inequities in who gets arrested or brought into the criminal legal system to begin with."

"When we have policies like this in place, we're not only hurting the people who are the business owners who have some kind of criminal history, but we're also hurting all of their employees, all of their families," said Gullen. "Entire communities are being impacted by that restriction."

"I have a criminal background, but I have a business. I've moved on with my life," said Edwards. "I feel like the government is still holding us back."