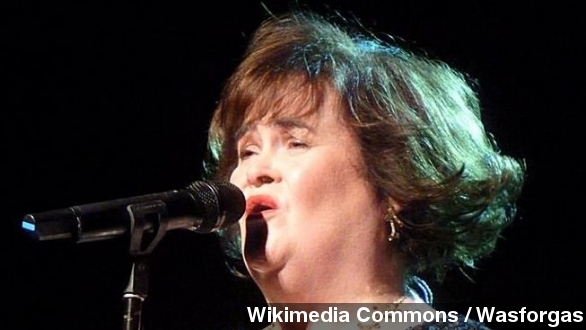 SMS
Singer Susan Boyle Reveals Asperger&#039;s Diagnosis
By Collin Ruane
By Collin Ruane
December 8, 2013
Boyle says she was diagnosed about a year ago and told The Guardian she&#039;s actually relieved by the diagnosis.
SHOW TRANSCRIPT

Scottish singer Susan Boyle has revealed she has been diagnosed with Asperger's syndrome.

Asperger's syndrome is a high-functioning form of autism that affects a person's communication abilities. (Via National Institute of Neurological Disorders and Stroke)

Many affected with Asperger's often have a hard time with social skills but are also known for having a wide vocabulary and unusually extensive knowledge on certain topics of interest — often obsessing over those interests. (Via CNN)

"I dreamed a dream of time gone by."

Boyle is perhaps best known for her 2009 audition on "Britain's Got Talent," where she wowed the judges and audience with her rendition of "I Dreamed a Dream." (Via ITV)

Boyle told The Guardian she's actually relieved by the diagnosis that was made about a year ago. That's because the singing sensation said she was initially misdiagnosed as "brain damaged" when she was born.

Boyle also said she decided to see a specialist in Scotland because she was worried she might have had a disorder that could have been much more serious. (Via New York Daily News)

She, of course, isn't the only person in the public eye who has been diagnosed with the disorder.

Others include 52-year-old actress Daryl Hannah, who says she was diagnosed with autism as a young child — and later found out she actually had Asperger's. (Via Forbes)

And almost 10 years ago, comedian Dan Aykroyd said he, too, has the disorder. (Via Digital Journal)

Boyle says even though she has been diagnosed with the neurological disorder, it doesn't define who she is. She recently released a new album called 'Home for Christmas.'