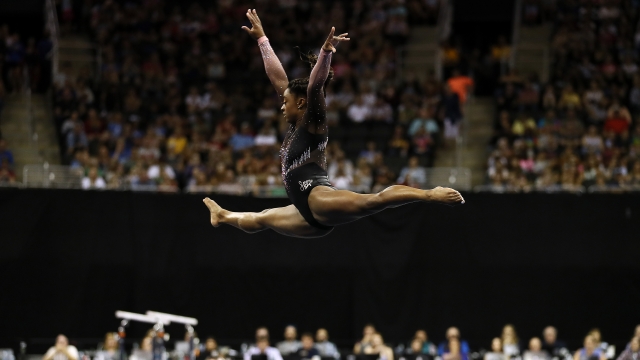 She defied gravity during her floor routine — becoming the first woman to successfully land a triple-twisting, double somersault. The move consists of two flips and three twists in the air. And for the record, only two men have ever pulled off the trick in competition.

Biles just missed the landing when she attempted the move during Friday's preliminaries.

Though the 22-year-old gymnast did make history during the prelims when she became the first person to ever do a double-double dismount off the balance beam.

Although the four-time Olympic champion simplified that routine somewhat for finals, Biles still took the top scores on floor, vault and balance beam on Sunday. She finished third in the uneven bars, which has historically been her weakest event.

As for the all-around title, Biles outpaced the second-place finisher by almost five full points. According to USA Gymnastics, no woman has won six U.S. championship titles since Clara Schroth-Lomady in 1952.