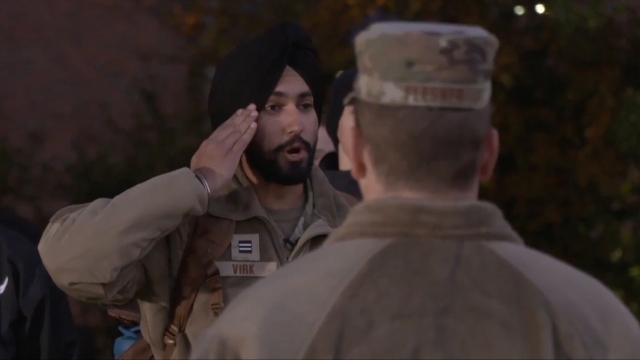 Gursharan Virk, a 21-year-old University of Iowa student, starts his day at 5:30 a.m. One of his roommates helps him shake the wrinkles off his turban.

Virk is Sikh; it's a monotheistic religion that began in Punjab, India. Sikhs traditionally don't cut their hair, as its considered sacred. Virk wraps a turban around his to keep it protected.

Virk dreams of one day being a pilot, and being a cadet at the University of Iowa's Air Force ROTC program gets him a step closer to his dream.

Still, Virk wasn't about to let his love for flying stop him from practicing his faith.

"Every Sikh who ties a turban is carrying that symbol that they're Sikh and is being able to represent that," Virk said. "I think that's one of the most important things for me."

For the military, uniformity among the ranks is seen as an essential part of discipline and battle readiness, so Virk had to apply for a religious exemption. He became the first Air Force Sikh cadet in U.S. history allowed to wear these reflections of faith: his turban, beard and bracelet.

"For people that have this passion to serve others and to serve their country, it is key that we grant them that opportunity," said Lt. Col. Matthew Youmans, commander of Air Force ROTC at the University of Iowa. "Generally speaking, it shouldn't be because of an appearances thing that holds somebody back from serving."

As an upper classman, Virk leads the younger cadets.

At a flag ceremony, much like the wrapping of his turban, there is symbolic meaning and attention to detail with each crease and fold of the U.S. flag. Virk sees no difference between practicing his faith and serving his country.

"It's pretty similar because, again, it's the service before self," Virk said. "It's one of the core values of the Air Force, and that aligns a lot with what Sikhism is." 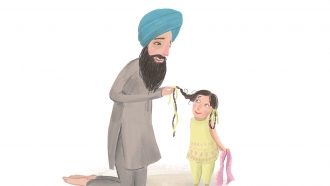 While Virk is allowed to wear his beard, turban and bracelet, that's not true for all Sikhs in the military.

Giselle Klapper, from The Sikh Coalition, represents three Sikhs who are suing the Marine Corps for the right to wear articles of faith during boot camp. They have put their military lives on hold for two years in this legal challenge and are currently waiting for the D.C. Circuit Court of Appeals to rule.

"It's actually an employment discrimination issue more than anything else," Klapper said. "There are other militaries around the world, including allies, that our forces fight with that way longer than the U.S. have found a way to integrate Sikhs without any issue."

Sikhs served in U.S. Army in World War I and II, but uniform standards in the 80s changed that.

The Air Force and Army have since granted religious accommodations to Sikhs. But the Marines have pushed back, telling The New York Times that religious articles get in the way of safety, begging the question: Can one serve their country safely and still practice their faith?

Dr. Kamal Singh Kalsi says absolutely, pointing to Army research done in 2016 ranging from the proper fitting of helmets to gas masks to other safety equipment. Kalsi went through it himself as the first Sikh in the Army to be granted religious accommodations.

"There's no reason why we can't serve," Kalsi said. "I've been through the gas mask testing, I don't know, maybe half a dozen times at least already."

Kalsi has been deployed to Afghanistan as a medical doctor, and when he trained alongside the Israeli army, some soldiers had beards and wore gas masks safely.

"There are arguments that are used and just sort of thrown out there over the years to try to push back against what we know is really blatantly racist and discriminatory institutional policy," Kalsi said.

Over 100 Sikhs serve in the U.S. Army and Air Force, and Virk will be one of them.

A trailblazer in his own right, his official permission was easy compared to others: It took him a few months, and even though he took the initiative, he credits the encouragement from his community.

"That community includes my friends... I have my family in Des Moines, so I talk to them, and I go back home," Virk said. "I got a whole lot of people, I guess, cheering for me." 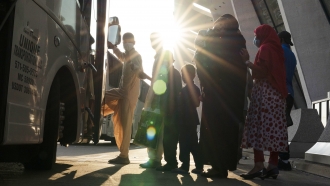