Shoes On The US Capitol Lawn Stood For Something, But Not This 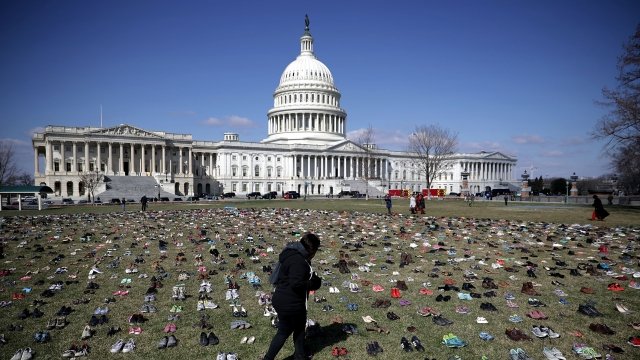 SMS
Shoes On The US Capitol Lawn Stood For Something, But Not This
By James Packard
By James Packard
March 19, 2018
This graphic claims more than 7,000 kids have been killed in U.S. schools since 2012. That number is way, way off.
SHOW TRANSCRIPT

If you saw pictures earlier this month of thousands of shoes spread out on the lawn of the U.S. Capitol, you might have also seen this graphic claiming they represented the more than 7,000 kids killed in U.S. schools since 2012.

But they don't. The shoes represent the number of children killed by all gun violence since the Sandy Hook school shooting in 2012. That's based on a 2017 study that estimates 1,300 children die every year from a gunshot wound.

But that didn't stop this image from getting a lot of attention.