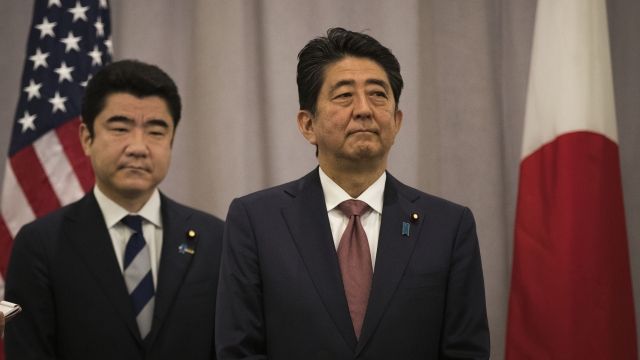 He's not the first Japanese leader to visit the memorial or travel to Hawaii, but he will be the first to offer official condolences to a sitting U.S. president at the site.

President Obama made history in May of this year — he became the first sitting U.S. president to visit the Hiroshima Memorial in Japan. He met with survivors and pushed his view of a post-nuclear age. Just as Abe isn't expected to apologize for the surprise attack on the U.S., Obama didn't outright apologize for the two nuclear bombs dropped on Japan during WWII.

Japan's relationship with the U.S. has changed drastically in the past few years. That pattern isn't expected to change under Donald Trump's administration.

Japan's treaty with the U.S. after WWII made it a pacifist nation that relied on the U.S. for protection. The new constitution only allowed a civilian defense force, and it outlawed war as a means to settle disputes with other nations.

That changed in 2015, when Abe led the government to "reinterpret" the constitution. New highly criticized laws allow the nation's defensive forces to support allies under attack — even if Japan itself isn't directly involved.

The goal was to give Japan more autonomy as a global player. Under the old interpretation, Japan's interests abroad were largely dictated by the U.S. in exchange for access to military bases on the far side of the Pacific Ocean.

Japan already covers most of the cost for U.S. military bases there. But Trump has said he wants to do away with these bases unless Japan pays more for U.S. protection.