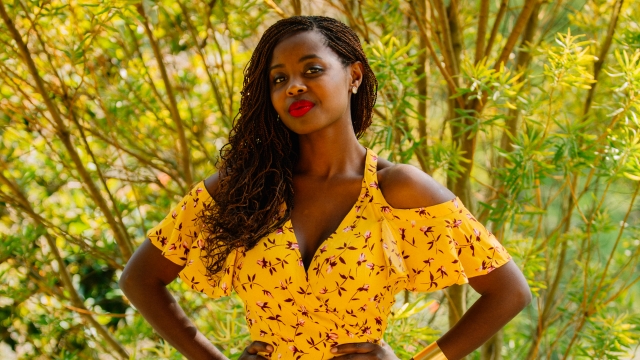 Clemantine Wamariya wants to be known as more than a war victim. With her memoir, she hopes to inspire readers to look deep beyond labels.

"It was one of the most important days of my life, it was the most joyful, like, utter joyful. Nothing like that had ever been ever been televised about Rwanda, you see. Our family just happened to be an example. As I reflect back, I'm like, 'Girl, be quiet. It was not about you.’"

More than 10 years ago, Clemantine Wamariya became forever known — in her own words — as "Oprah’s special genocide survivor." Wamariya fled the 1994 Rwanda massacre with her sister when she was only 6, leaving her parents and other siblings behind. She spent the next six years in refugee camps and slums across seven African countries. She eventually resettled to the U.S. when she was 12.

"I decided that no one was going to add onto my story until I allowed them to."

Today, Wamariya wants to be known for more than the victimhood that was ascribed to her as a child. Through her memoir, she hopes to open readers' minds to the importance of seeing every human story behind labels and first impressions.

"We won't see the artists that you are if we begin with the story of your poverty. And so I wanted people to meet me in a place of my imagination. Because I don't want to live in the shadow of this story of a girl as a refugee."

In the space of 100 days, one in 10 Rwandans — or around 800,000 people — were killed during the country's ethnic conflict. But these numbers are deliberately absent from Wamariya's book. That's because she wrote it from the point of view of the young girl she was at the time.

"Honoring that girl took a lot. As an adult, I learned that wars are caused by people. You know, as a child, I didn't know. I didn't know, I didn't understand. But I felt it."

Wamariya hated the word "genocide" right away when she heard it for the first time in eighth grade. Her American friends often asked her whether the Rwandan genocide was like the Holocaust, or the Killing Fields in Cambodia, or the ethnic cleansing in Bosnia. But she says those comparisons hurt her because they overlooked the specific and personal aspect of each tragedy.

"So for me, that word is just an invitation, an invitation for us as humans to be able to pause and think about the vocabulary, the words, the terms, the titles in which we use to describe each other's most heartbreak moments."