Sharapova Could Compete In Some Major Tournaments Next Year 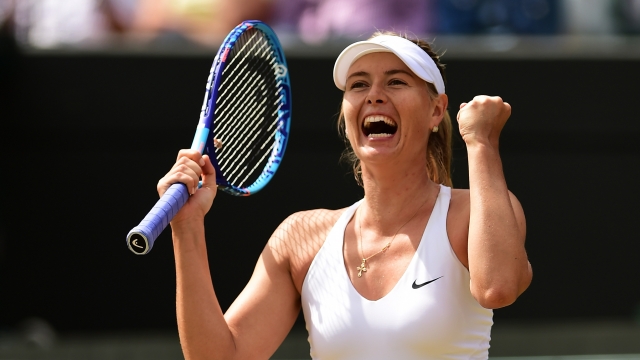 SMS
Sharapova Could Compete In Some Major Tournaments Next Year
By Katherine Biek
By Katherine Biek
October 4, 2016
The tennis star's suspension for doping has been reduced, and it will now end about a month before the French Open starts.
SHOW TRANSCRIPT

Maria Sharapova has something to smile about. It was announced Tuesday that the tennis star's two-year suspension for doping has been reduced by nine months.

The Court of Arbitration for Sport said Sharapova still "bore some degree of fault" for having tested positive for the banned substance meldonium, and it felt a 15-month suspension was "appropriate."

So now that Sharapova can begin competing again in late April, there's a whole slew of tennis tournaments that can be penciled into her schedule.

The big one? The French Open, which starts in late May.

Sharapova won the women's singles portion of that tournament in 2012 and 2014.

She'll also be able to compete at Wimbledon. Sharapova has competed at this tournament 13 times, but only won once, in 2004.

And Sharapova can attend the 2017 U.S. Open — making January's Australian Open the only grand slam tournament Sharapova can't participate in.

As for her sponsorships, Sharapova might be able to pick up a couple that cut ties with her earlier this year, such as Porsche and watchmaker Tag Heuer.

In response to the court's decision, Sharapova wrote on Facebook, "In so many ways, I feel like something I love was taken away from me and it will feel really good to have it back. ... I am counting the days until I can return to the court."