How One 2020 Candidate Wants to Help Veterans Get Medical Weed 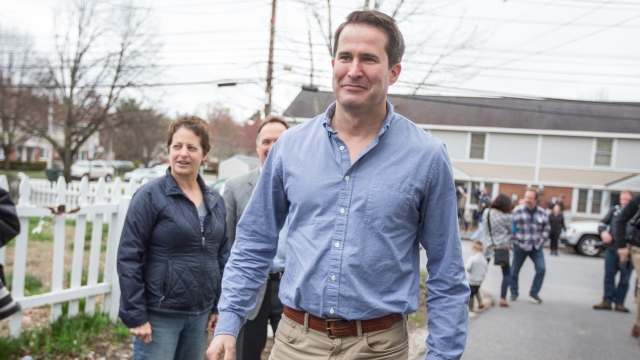 SMS
How One 2020 Candidate Wants to Help Veterans Get Medical Weed
By Kellan Howell
By Kellan Howell
May 22, 2019
State cannabis laws have left one group of medical marijuana users in limbo: veterans. Rep. Seth Moulton has three bills that could help.
SHOW TRANSCRIPT

"There are doctors -- we've heard all the stories -- who just tell their patients that they may lose their benefits if they talk about this because it's breaking federal law to use cannabis," Massachusetts Democratic Rep. Seth Moulton told Newsy.

Medical marijuana is legal in more than half of U.S. states, but current cannabis laws have left veterans in limbo.

Some former service members have found marijuana to be an effective way to treat PTSD and an alternative to opioids for chronic pain, but those who receive health care from the Department of Veterans Affairs are in jeopardy of losing their benefits entirely if they use weed.

VA doctors can't prescribe or even recommend marijuana as a treatment for patients because of federal laws, and many veterans fear even discussing the option with their doctors.

"I see it myself because I have a Facebook group with me second platoon, we talk almost every day. And a lot of the Marines go to each other for advice on where to get cannabis, on how to use it, what varieties are best," Moulton said. "Those are discussions that you should be able to have with a health care professional and a lot of veterans feel uncomfortable having those discussions right now because this is ambiguous policy at the VA."

Now, Moulton, a 2020 democratic presidential candidate, is teaming up with GOP Rep. Matt Gaetz to sponsor three bills that aim to clear up the confusion. They direct the V.A. to train doctors on the use of medical marijuana and to conduct a study on how veterans use cannabis.

It would also codify protections to keep former service members who do use cannabis legally from losing their V.A. health care benefits.

"I think that this is an important step in the right direction for cannabis, not just for veterans but for the whole country. I mean, if the VA can figure this out and we can do what's right by veterans, then hopefully we can use that model to expand to the rest of the country," Moulton said.

Federal law hasn't stopped some from using marijuana. A 2017 survey from American Legion found 22 percent of veterans use medical cannabis.

Earlier this year the Trump administration opposed a similar package of bills. At an April House Veteran Affairs Committee hearing on the legislation, VA officials said that as long as marijuana is still federally illegal they could not support any legislation that promotes its role at the VA.

Congress has multiple bills to remove cannabis from the list of federally controlled illegal substances, Including two companion bills introduced in the House by Congressman Hakeem Jeffries and the Senate by Sen. Chuck Schumer.

Four 2020 Democratic candidates are co-sponsoring the bills, and Moulton told Newsy he plans to sign on as the fifth.

But, marijuana isn't the only treatment option some veterans are considering.

Last month, voters in Denver opted to essentially decriminalize psilocybin, or magic mushrooms, which some studies have shown can be used to treat PTSD. Now, other states like California and Oregon are weighing similar ballot measures in 2020.

When it comes to federal legalization, Moulton says there needs to be more research, but it's not off the table.

"I'm absolutely open to exploring it, but I honestly haven't. So, I just don't know. This is part of our job in Congress is, rather than being black and white about these issues when we don't even understand the facts, this is a good example of something where I just need to learn the facts and understand more about it," he said.